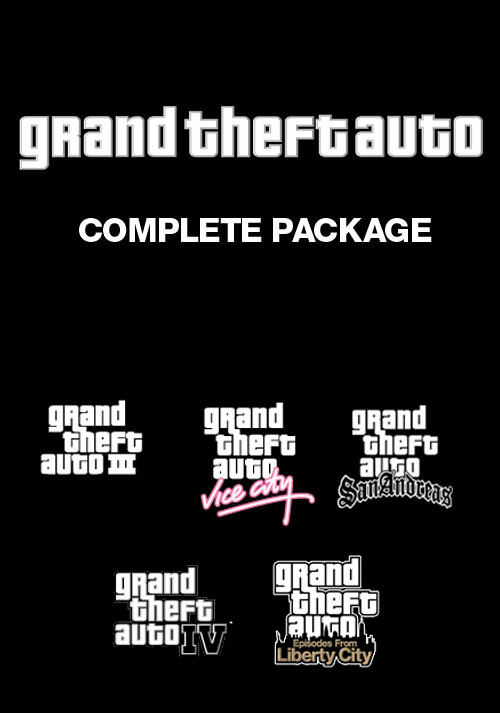 Grand Theft Auto III
Crime does pay. The hugely successful, highly controversial Grand Theft Auto franchise moves into 3 dimensions in the dark and seedy underworld of Liberty City. With the freedom to go anywhere and jack anyone, Grand Theft Auto 3 puts the dark, intriguing and ruthless world of crime at your fingertips, if you have enough guts to take it.

Grand Theft Auto: Vice City
Welcome to the 1980s.
From the decade of big hair, excess and pastel suits comes a story of one man's rise to the top of the criminal pile as Grand Theft Auto returns. Vice City is a huge urban sprawl ranging from the beach to the swamps and the glitz to the ghetto, and is the most varied, complete and alive digital city ever created. Combining non-linear gameplay with a character driven narrative, you arrive in a town brimming with delights and degradation and are given the opportunity to take it over as you choose.

Grand Theft Auto: San Andreas
Five years ago Carl Johnson escaped from the pressures of life in Los Santos, San Andreas... a city tearing itself apart with gang trouble, drugs and corruption. Where filmstars and millionaires do their best to avoid the dealers and gangbangers.
Now, it's the early 90s. Carl's got to go home. His mother has been murdered, his family has fallen apart and his childhood friends are all heading towards disaster.
On his return to the neighborhood, a couple of corrupt cops frame him for homicide. CJ is forced on a journey that takes him across the entire state of San Andreas, to save his family and to take control of the streets.

Grand Theft Auto IV
What does the American dream mean today?
For Niko Bellic fresh off the boat from Europe, it is the hope he can escape from his past. For his cousin, Roman, it is the vision that together they can find fortune in Liberty City, gateway to the land of opportunity. As they slip into debt and get dragged into a criminal underworld by a series of shysters, thieves and sociopaths, they discover that the reality is very different from the dream in a city that worships money and status, and is heaven for those who have them and a living nightmare for those who don't.

Grand Theft Auto: Episodes from Liberty City
In The Lost and Damned, experience Liberty City as Johnny, a veteran member of The Lost, a notorious biker gang. Johnny has been creating business opportunities for The Lost in Liberty City but his first loyalty must be to the patch he wears on his back and to Billy Grey, the club's President. However, when Billy returns from rehab hell-bent on bloodshed and debauchery, Johnny finds himself in the middle of a vicious turf war with rival gangs for control of a city torn apart by violence and corruption. Can the brotherhood survive?

The Ballad of Gay Tony injects Liberty City with an overdose of guns, glitz, and grime. As Luis Lopez, part-time hoodlum and full-time assistant to legendary nightclub impresario Tony Prince (aka "Gay Tony"), players will struggle with the competing loyalties of family and friends, and with the uncertainty about who is real and who is fake in a world in which everyone has a price.