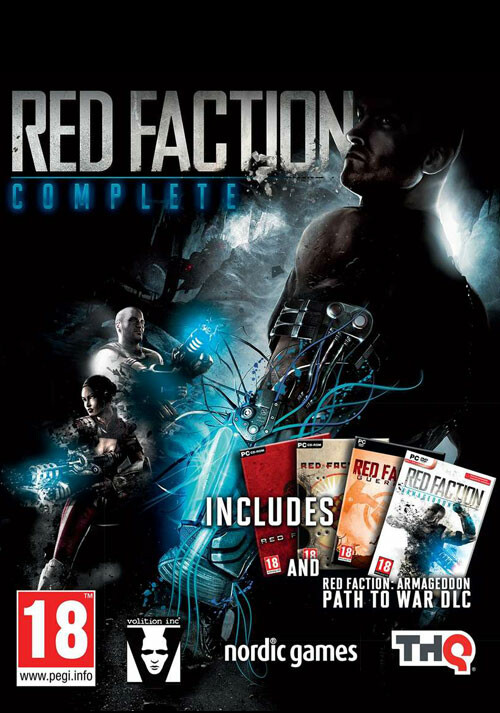 Red Faction Guerrilla Re-Mars-tered Out Now, Save 50% off!

Revisit the Red Planet as Red Faction Guerrilla Re-Mars-tered is now available! The original game launched back in 2009 and put players in the shoes of Alec Mason as he assists the Red Fa...

Step back onto Mars as Red Faction Guerrilla Re-Mars-tered is coming to PC and consoles on July 3rd! This updated version will support higher resolutions, improved shadows, fully reworked...

Red Faction:
Lured to Mars by the Ultor Corporation's promise of a better life, thousands have come to seek their fortune and work for the massive mining company. But all is not as it seems. A deadly plague is sweeping through the barracks, and miners suffer daily abuse at the hands of the Ultor guards. Is a revolution on the horizon?

Red Faction revolutionizes gaming with Geo-Mod technology, the ability to completely alter and destroy the environment in real-time. Featuring 5 controllable vehicles, 15 weapons of mass destruction, unparalleled multiplayer action, and a setting on Mars in the midst of a deadly plague and rebellion, Red Faction sets the gold standard in gaming!

For the last 15 years, Sopot, the corrupt dictator, has oppressed the people of the Commonwealth. His relentless pursuit of unification with the neighboring United Republic has left the country soaked in unnecessary bloodshed and poverty. Propaganda is plastered throughout communities and a Public Information Building, built as a tribute to the self-centered chancellor, spews news broadcasts with claims of victory as more and more soldiers fall victim. Fed up after years on the front lines, a group of super-soldiers injected with nanotechnology vow to replace the dictator and restore peace.

Defend your country as Alias, a demolitions expert, with the help of your five squad members, each specializing in their own method of destruction. Fight through diverse levels using vehicles, an arsenal of specialized weapons and massive explosives in your rampage to overthrow the government.

Red Faction Guerrilla Re-Mars-tered Edition:
Red Faction: Guerrilla takes place in the year 2120. The Earth Defense Force (EDF), the allies in the original Red Faction, have become the main antagonist of Guerrilla. Although initially supportive of the Martian miners, Earth's natural resources have run scarce, and as a result, its world economy has collapsed from rampant speculation of commodities and lack of production. Under pressure by Earth's corporations and leaders to acquire the resources of Mars at any cost and at a pace to meet Earth's high demand, the EDF has forced Martian society into a permanent state of unfree labour. The newly-reformed "Red Faction" arises to revolt against the EDF, drive them off the planet, and begin fairer negotiations with Earth.

Red Faction Armageddon:
A long-dormant evil emerges from the caves of Mars, unleashing Armageddon on the planet’s colonists. With this force stopping at nothing to cleanse the planet of life, mankind finds itself poised on the brink of extinction. Red Faction: Armageddon expands on the critically acclaimed, best-selling franchise with new, groundbreaking challenges. You are humanity’s last hope for survival.

Red Faction Armageddon 'Path to War': The Earth Defense Force has been defeated, and after centuries of oppression, Mars is finally free. For a time, there was peace. Yet from the forgotten ashes rose Adam Hale, scarred from years of struggle, seeking ultimate revenge against the Red Faction. His target, the one thing that keeps the surface of Mars habitable for thousands of colonists, is the Terraformer. Relive the battle for the Terraformer through four incredible new missions featuring aerial flyers, orbital strikes, and the Red Faction armored surface tank. Unlock two destructive new weapons, the Sharpshooter Gun and Shard Cannon, while earning ten new achievements in this thrilling new mission pack for Red Faction: Armageddon!