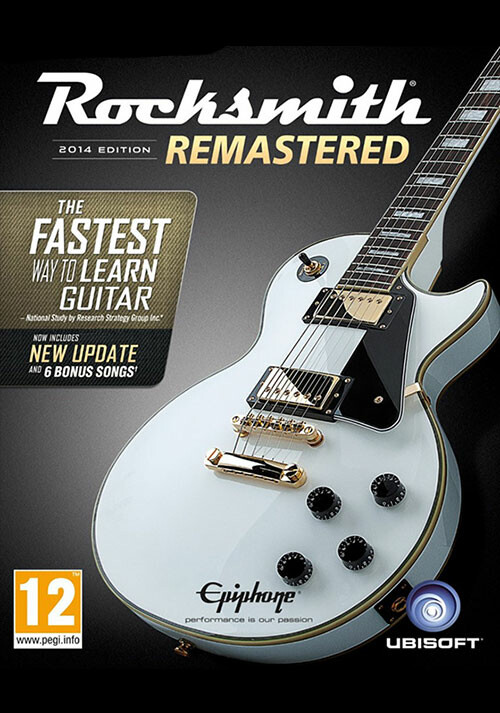 The fastest way to learn guitar is now better than ever. Join over three million people who have learned to play guitar with the award-winning Rocksmith® method. Plug any real guitar or bass with a 1/4 inch jack directly into your PC or Mac and you’ll learn to play in just 60 days.

With Rocksmith you can learn everything from single notes to chords and advanced techniques, all at your own pace. You’ll learn fast because it adapts to your skill level as you play, whether you’re a beginner or an experienced player.

Rocksmith® 2014 Edition – Remastered includes a free downloadable update with a customizable learning curve, expanded practice tools, stat tracking, improved menus, and more. If you already own the original game, you can download the remastered updates for free at launch on October 4; there’s no need to repurchase.

“Three Little Birds” by Bob Marley & The Wailers
“Suspicious Minds” by Elvis Presley
“Some Nights” by FUN.
“I Want You Back” by Jackson 5
“Hey Ya!” by Outkast
“Drops of Jupiter” by Train

"Rocksmith may resemble Guitar Hero or Rock Band on its surface, but the title is a surprisingly thorough instructional tool that teaches you how to play a real guitar."

"Rocksmith 2014 many improvements on its predecessor see the franchise elevated from a decent diversion to a great tool for budding strummers and shredders. There's a ton of quality..."

"Polished, educational, and fun, Rocksmith 2014 is an improvement on the original in almost every way."

– John Fleury, We Got This Covered