DEATHLOOP is a next-gen FPS from Arkane Lyon, the award-winning studio behind Dishonored. In DEATHLOOP, two rival assassins are trapped in a mysterious timeloop on the island of Blackreef, doomed to repeat the same day for eternity.

Developers explain exactly what DEATHLOOP is in new video!

Bethesda cranks up the time travel to 11 with FPS game DEATHLOOP coming to PC on May 21st. Learn more about what the game is in a brand new developer video while you wait!

Have you ever been stuck in a time loop and experienced the same thing over and over? There have been a number movies and tv shows that have taken the concept and brought it to life, with films such as Groundhog Day and Edge of Tomorrow to name a few. Later this year developer Arkane (best known for their work on Dishonored and the Prey reboot) are set to release "DEATHLOOP", a first person time travel game that sees you stuck in a time loop, doomed to repeat the same events over and over.

While the game has been shown off at various events, fans may still be scratching their heads on what exactly the game is. Thankfully, the devs have released a brand new gameplay video to try to answer the confusion as Game Director Dinga Bakab explains in more detail what DEATHLOOP actually is.

Players will travel to the island of Blackreef as an assassin named Colt, where the only way to break the cycle is to eliminate targets. Once you've killed all 8 targets you'll be able to escape this nightmare. However it's not a simple case of killing each target as you'll need to learn from your mistakes in order to succeed. Each time you'll die you will learn more about the island layout and enemies, while also keeping any new abilities and weapons that you acquire (much like other roguelike games).

Speaking of powers, like Arkane's previous titles you'll have a number of abilities at your disposal and even weapon upgrades that'll make you more deadly against foes.

Can you break the loop and make it off the island alive? Find out when DEATHLOOP launches on May 21st 2021, pre-order any version to save 10% off and get bonuses! 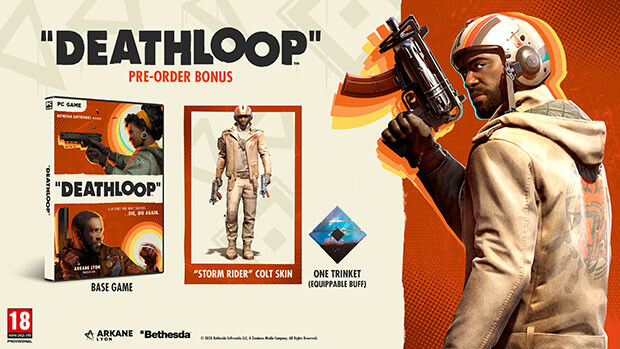