Now an experienced covert operative, Adam Jensen is forced to operate in a world that has grown to despise his kind. Armed with a new arsenal of state-of-the-art weapons and augmentations, he must choose the right approach, along with who to trust, in order to unravel a vast worldwide conspiracy.

Time for an Upgrade

When we last saw Adam Jensen he had just saved the world from the sinister Illuminati, 2 years after the events of Deus Ex: Human Revolution we see him working with a specialist group to uncover more about this mysterious organisation and put a stop to them. It's hard to believe Deus Ex: Human Revolution was released in 2011 and after a few delays Deus Ex: Mankind Divided has finally landed, the question is how does it hold up vs it's predecessor and can a game as perfect as Human Revolution really be beaten?

Let's take a look at the reviews and find out the word on the street. 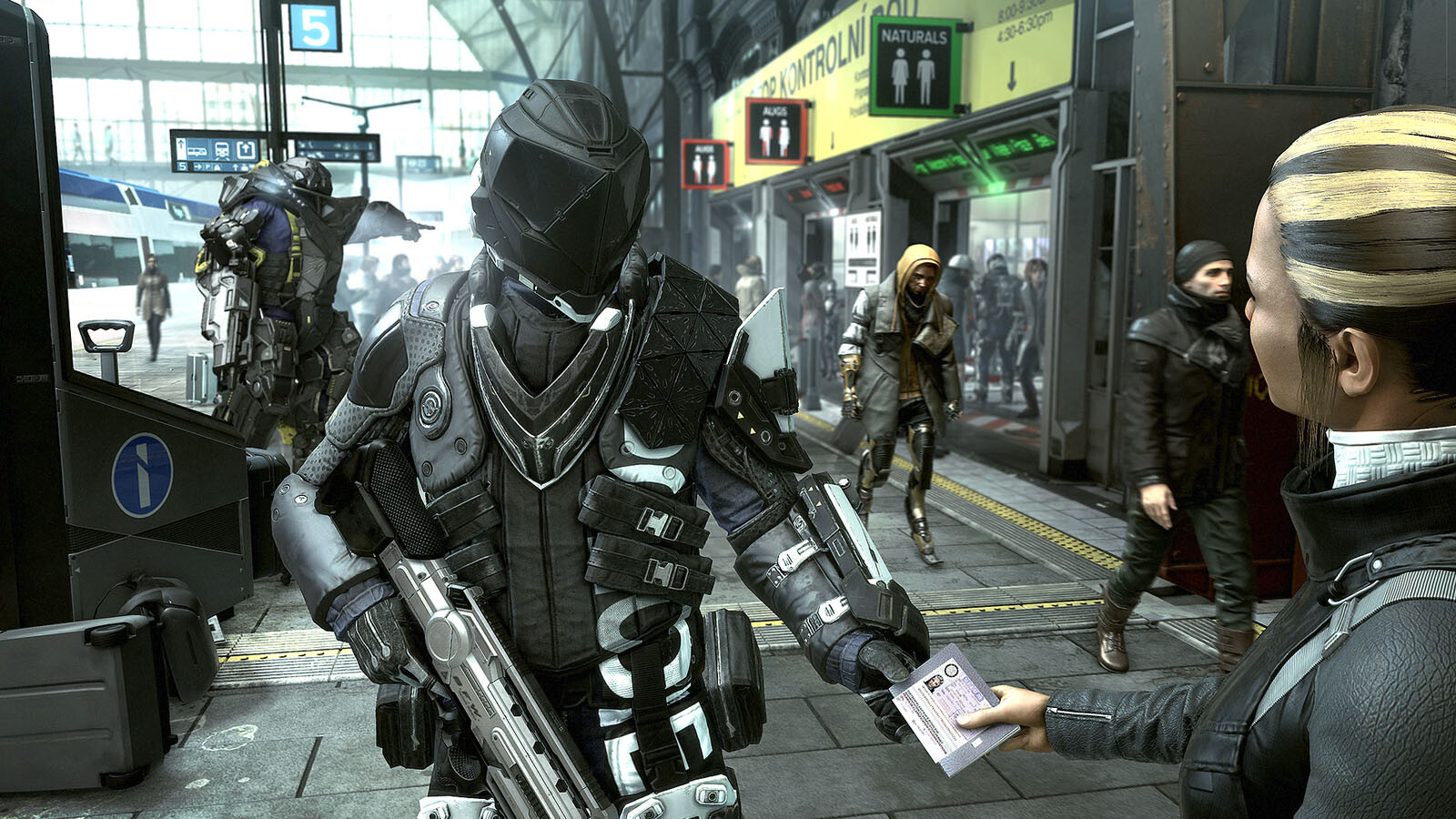 First up we take a look at IGN who gave the game an amazing score of 9.2 out of 10, Human Revolution had some truly amazing augmentations at your disposal such as the Icarus Landing System, Typhoon Explosive System, Glass-Shield Cloaking System and more. In Mankind Divided you'll have access to many other upgrades such as the Icarus Dash which allows you to find new areas you wouldn't normally be able to access, add in the ability to grapple up ledges and you can climb buildings as well as Spider-Man. This harmonious relationship between mechanics and environmental design extends to the returning augments as well, lending a sense of value and purpose to even the most basic-seeming of upgrades. It's also nice to see classic augments from the previous game return, if you loved something from that then you'll likely have it again.

Moving on is the review from the guys and girls at Giant Bomb, while the game starts you in Dubai - most of the it takes place in Prague with various parts of it to explore and move about with. Prague is the game, with a few missions along the way that take you to separate areas for awhile. Each district is broken up and can be access via the train, it's also much easier to have larger open areas without loading screens, something that the original had issues with and required a loading screen for most new areas. It received 4 out of 5 stars, though the story may not be the most interesting thing it still managed to shine bright with the great city of Prague being brought to life. It might not be an especially surprising sequel, but it all comes together quite nicely, with solid side missions and a mix of action and stealth that lets you mess around and find your own way of doing things. 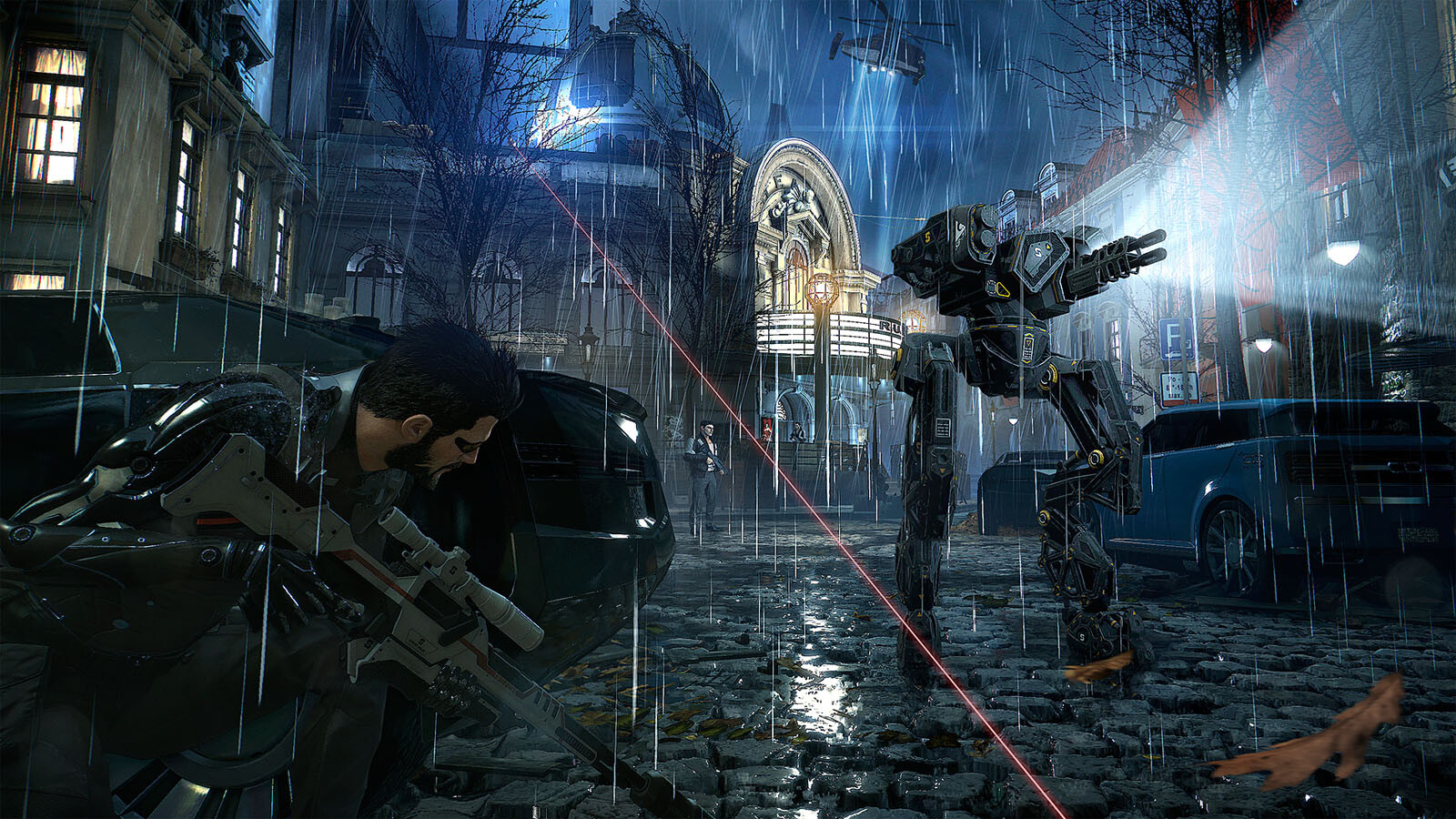 Luckily I have a built in cloak for these situations

GameSpot awarded it 8 out of 10, just like in the last game you're given the choice on how you want to approach things, you can go the Stealth route and avoid conflict or you can go head to head with anyone you meet. This time you're given plenty of new tools to such as TESLA, PEPS, and Nanoblade abilities however to use some you're going to make a tough decision as you're forced to disable some to make way for others. The necessity of permanently disabling some skills in order to power others early in the campaign made me stop and seriously think about how I would be handling situations in the future. In addition there is a new mode in Mankind Divided called "Breach", think of Breach like a virtual world for Deus Ex (like Tron or Metal Gear Solid's VR Missions as an example. Breach also attempts to tie directly into the Deus Ex universe. As you progress, new conspiracy stories arise and unlocking their details requires you to successfully collect a number of gems in particular missions.

And finally we have the review from the folks at Games Radar+. Weapon customisation has been added to the game and it allows you the chance to upgrade your weapons further to fit the situation at hand, An excellent sequel that expands your toolbox and offers complex, multifaceted environments to explore. One of the big things about any RPG is the ability to do side quests and Mankind Divided doesn't disappoint, you'll have plenty of different side missions as you explore Prague - but you'll need to keep an eye out for them as they can easily be missed if you don't explore everything. Mankind Divided is full of great moments, from the lengthy journey across The Throat of Golem City, to the simple pleasure of crouching in a Prague bank, wondering how next to proceed. They scored it a generous 4.5 out of 5. 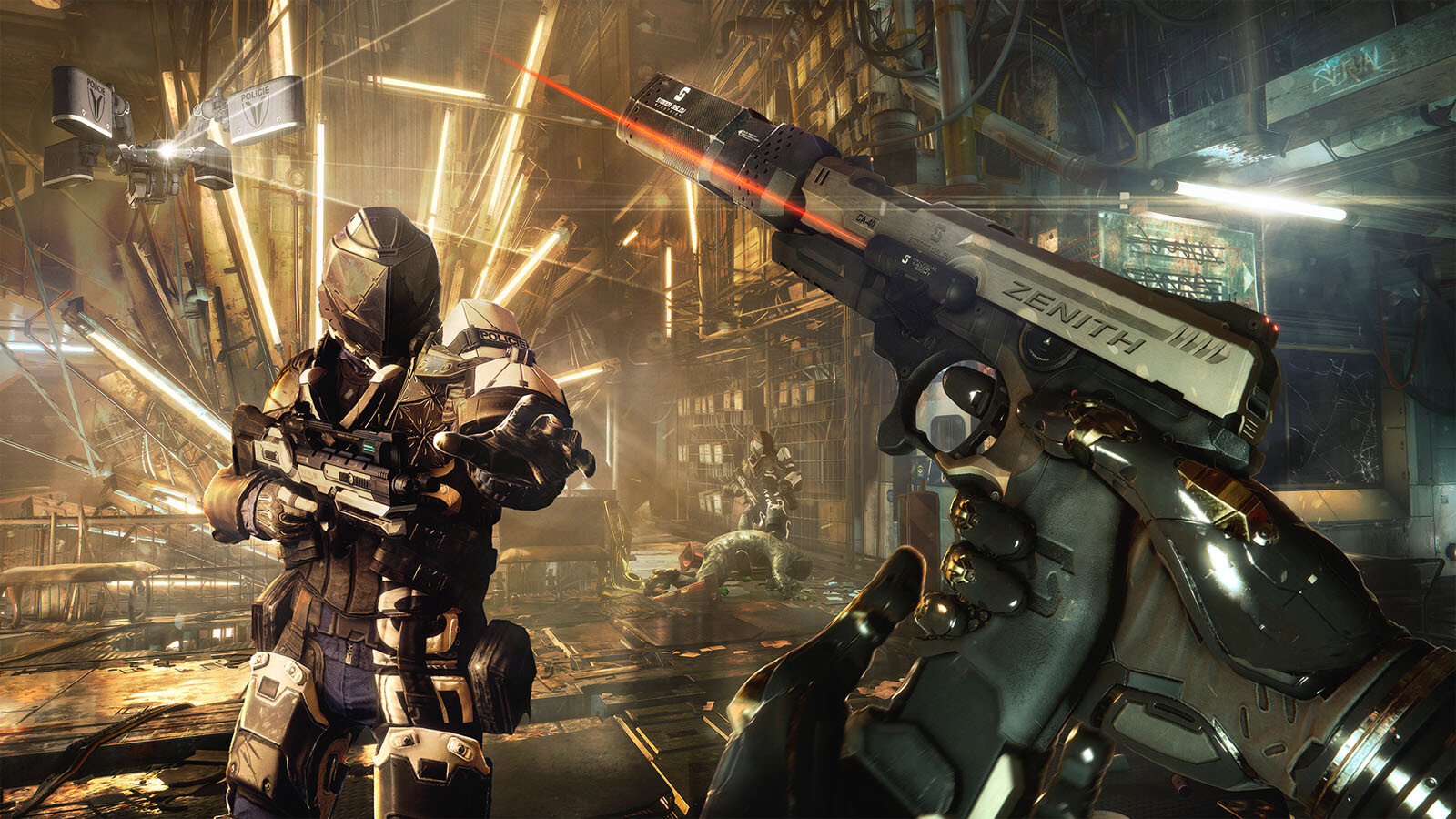 You will give me that gun...please?

Positive reviews across the board, it's exactly what we wanted in a sequel and lives up to the standards of Human Revolution, maybe even going beyond what the original set out to do but stumbling in a few key areas which haven't really aged. If you enjoyed the original then this is probably going to be another great 20-30 hour ride filled with plenty to see and do!

I myself managed to get a little playtime with the title as well, though performance on my system while ok seemed to really stress my 980 Ti - in which the card would randomly speed up for no reason at all (regardless of what my settings were). Minor complaint aside it looks great and it feels great, I can't comment too much on the story because I haven't spent that much with it but what I will say is that it starts off with a bang and throws you into Dubai with all the powers you had before to give you a crash course on how to play. I didn't mind this as it had been too long since I played the first game and welcomed the "tutorial level" to bring my back up to speed.

Looking forward to making my way to the end of this and I hope everyone that loved the first game will also love this :)