Gamesplanet Review Round Up: For Honor

Shields will splinter, Swords will clash, Foes will perish!

Over the years we've had a number of highly successful online multiplayer games, such as Overwatch, DOTA 2, Team Fortress 2, League of Legends, Rocket League and more. At the end of 2015 a game known as Rainbow Six Siege took the world by storm as it's explosive multiplayer and great teamplay mechanics made it a smash hit among the critics and fans alike. Two years on and Ubisoft is back with yet another heart pumping multiplayer title that will see you working together to prove who is the best in battle once and for all in the third person action hack and slash brawler For Honor.

What are the critics response to this new kid on the multiplayer block! Will it live up to the success of Rainbow Six Siege? Let's dive into the reviews and find out for ourselves! 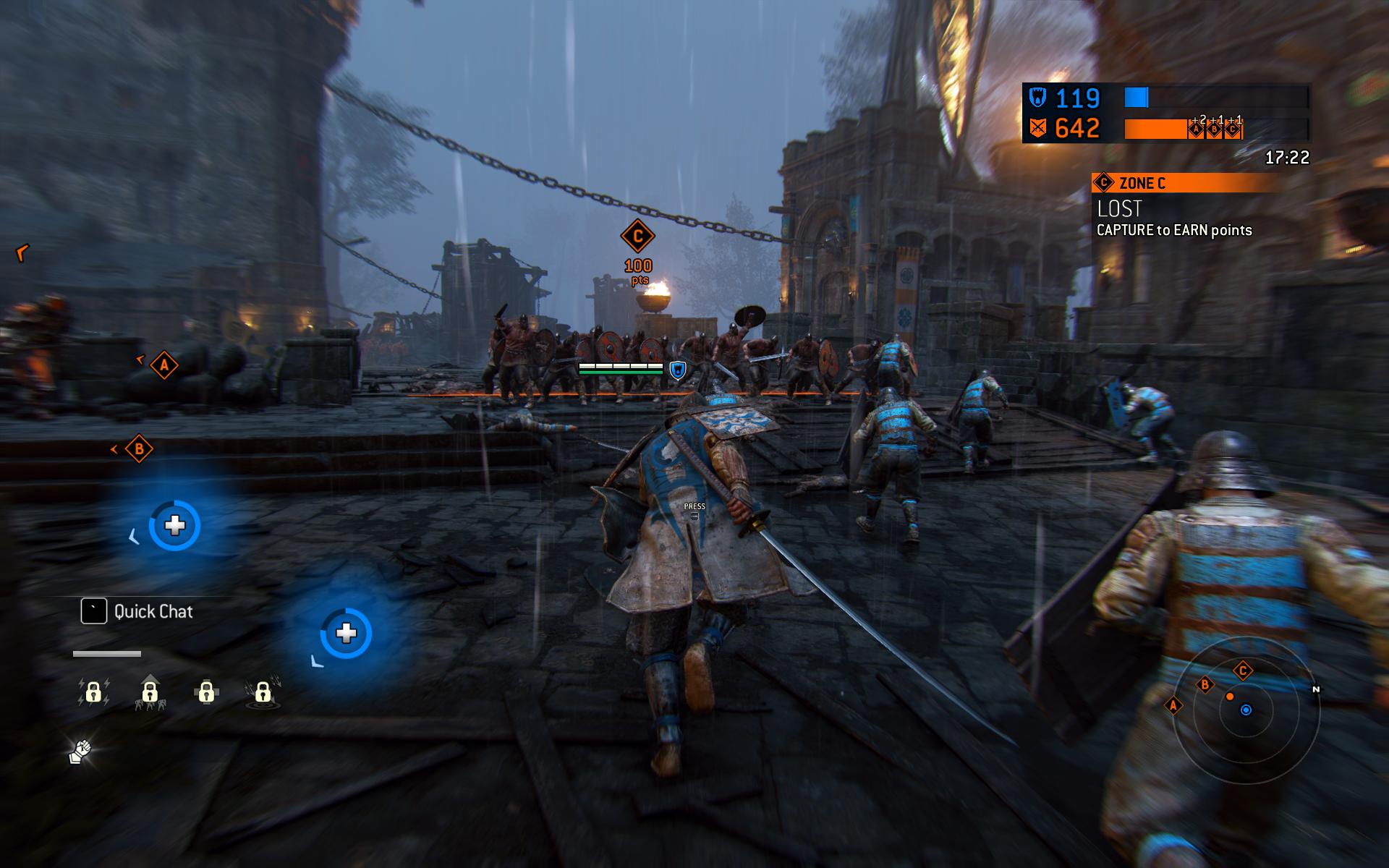 Storming us into the front first we've got the review from GameSpot who awarded For Honor with a lovely 8 out of 10. The game's main focus is on multiplayer, you'll be able to pick from a selection of 12 heroes from 3 different factions, each with their own unique set of moves and looks. As you start out you'll need to time blocking and dodging attacks in order to survive since each character plays differently, it's important you get used to how they behave against others and learn to fight others. Eventually you'll get used to the way the game works and soon you'll be engaging others toe to toe in heated battles. Every moment you spend in combat is rife with strategic possibilities: should you keep baiting an opponent with an attack or dodge? Should you get in close and knock them into a nearby pit? Or should you disorient them by being overtly offensive? For Honor's combat encourages adaptive thinking, providing substantial depth and balance in its moment-to-moment action and myriad matchups.

Next onto the battlefield we have the guys over at GameCrate. While For Honor's main focus is on the Multiplayer that doesn't mean the game doesn't have any Single Player Campaign (unlike Rainbow Six Siege) and you'll be able to enjoy 3 separate "mini campaigns" with 6 levels per one - each focusing on one of the factions in the game, Knights, Vikings and Samurais campaigns will test your skills and serve as a training mode for playing each class. When the game doesn’t rely on cheap gimmicks, however, single-player mode serves as perhaps the best tutorial a fighting game has ever had. It forces you to use several different characters in the roster and introduces you to each of their unique mechanics one by one. It also makes you face opponents that will use mix-ups that online players do. While the story itself is short and a tad on the easy side, you do get a sense of learning the game outside of the practice modes against bots. Levels are a mixed bag and will have some great set pieces, such as one level that has you riding on horseback to catch up to an enemy. It was given a 7.75 out of 10. 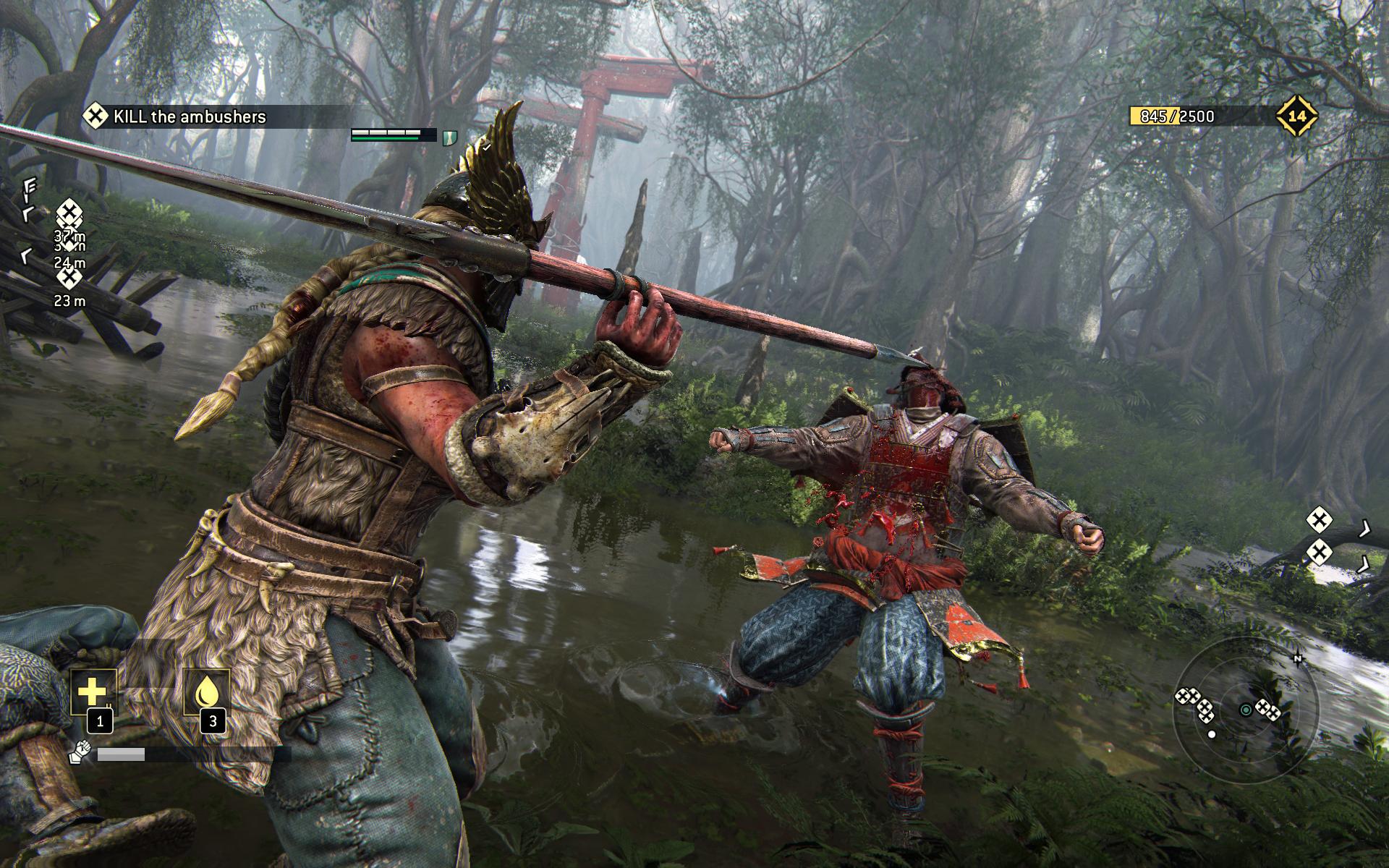 Fancy a nice spear for lunch?

IGN are also impressed by the fast paced action of For Honor's Multiplayer and gave it 8 out of 10. You have the option to play in various modes such as Domination (the most popular) or smaller brawls with 2v2 or 1v1 modes, Domination will see two teams of four fight it out as the get control points on the map, much like a MOBA title you'll need to push troops forward to unlock the middle lane as you work on securing others. Should you find yourself in a sticky situation against a group of enemies in a 2 or 3v1 then it may not be over as the game has a "Revenge" meter that when filled can give you a temporary boost to damage, defense and health so you can make a comeback. For Honor includes an equalizer called Revenge mode - a meter that slowly fills when you’re on the defensive - that, when activated, grants you a temporary attack and defense buff along with a shield to soak up the damage. It’s a great tool to help turn the tide, and it regularly swings a fight in your favor, at least for a time.

Rounding us out is the review from Shack News giving it another 8 out of 10. Customisation plays a bit part in For Honor's systems and you'll be gaining various pieces of equipment as well as new "power up" moves as you level up each of the 12 heroes. For each battle you fight in you may get gear scavenged from enemies, though you can always unlock "Scavenger Crates" outside of battle that award gear by exchanging currency. The game features a whole host of various things to make your hero unique from another of the same class and gear can be upgraded to boost stats further. New colors, emblems, and outfits can be unlocked by leveling up, accomplishing tasks, or with in-game currency. Items that you win after matches can modify your equipment and add or subtract from your hero's stats. A suit of armor, for example, can add to your stamina regain, but it'll also take away from your revenge mode timer. 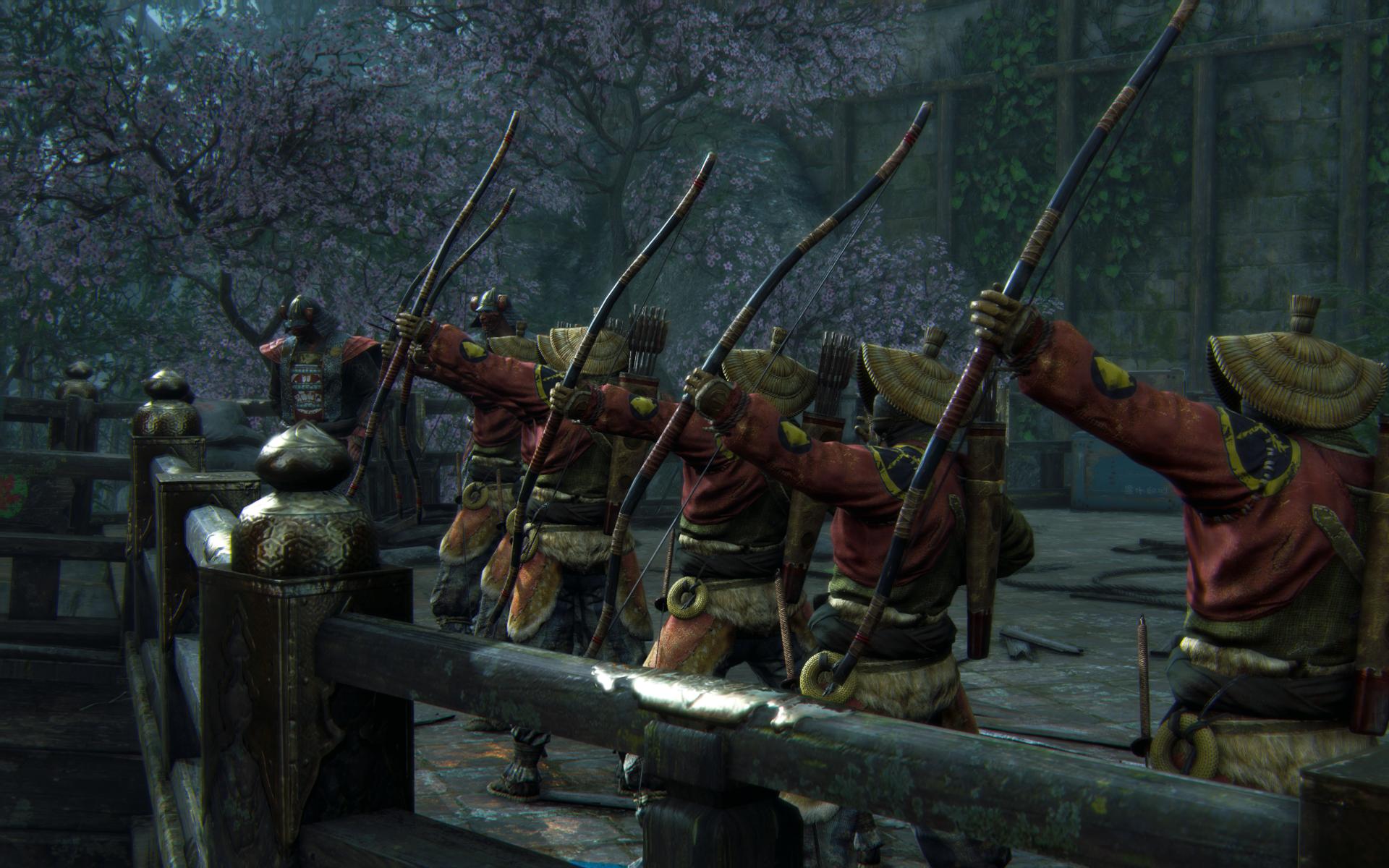 I can't believe we have to wear these hats in uniform

The jury seems to be in favour of the latest multiplayer title from Ubisoft, with fast paced action and a gorgeous looking game that has some impressive looking stages (helped along with the extensive PC options available) which are sure to be a joy to play with for many months to come. The biggest concern among the critics is the unbalance in the larger modes, though Revenge does it's best to balance it can often lead to a decline. If you're looking to "Lone Wolf" the game you may be disappointed as it will require some teamwork and communication to succeed. Additionally the game focuses on P2P for servers and at times it can cause various connection issues that may result in not being able to play or finding ping issues.

After spending time with the game myself it's Single Player does have some nice modes in but fans expecting a deep experience may be left disappointed as it's Multiplayer is the focus of the game, matchmaking can often feel unbalanced and you may end up in teams with bots on. There is plenty to sink your teeth into with For Honor and more promised in the next few months via the Season Pass it's looking like fans can enjoy a steady stream of content (both free and paid for). The controls with Keyboard and Mouse can be a bit hard to get to grips with (controller is the preferred method), but eventually you'll be blocking like an expert. My biggest piece of advice is to play the Single Player Campaign first and learn the controls of each hero as best you can before heading into the multiplayer. In my opinion Ubisoft have provided a great action game, which may not be to everyone's taste but it definitely has a place that sets it apart from other games in the genre.

For Honor can be yours today, if you're ready for battle that is!