For Honor developers sat down with us to chat about their latest game, including improvements they made from player feedback during the beta and what the future holds in store.

We recently had the chance to chat with the team behind this fast paced brawler to find out what the future holds and how they plan to expand the game over the next few months with new content. The interview was with Game Director Roman Campos Oriola, join us as we take a look behind the scenes!

Gamesplanet: How much of a learning curve will there be for this game? Will it take a long time to learn all of the different classes’ strengths and weaknesses? How do you make sure the game can address any type of gamers, including casual players?

Oriola: Our core gameplay innovation, the Art of Battle puts player in total control of all their moves on the battlefield. This is a something really new, but it is easier to apprehend than what people would typically expect.

In addition, all players start with a tutorial just after booting the game, which teaches the basis of our control system. The story mode also includes tutorial elements, and it is possible to enjoy all the multiplayer modes against the AI – which is a good way to learn for new players.

But of course, For Honor is meant to be a skill-based experience where every mistake can be the difference between life and death and every death the difference between victory and defeat. Each of our 12 warriors has a unique weapon set, unique moves, animations and progression loop. On top of the top-left-right guard system, our core fight gameplay also includes dodges, guardbreaks, throws, parries… so there`s a lot of depth here as well. Gamesplanet: Will the matchmaking system ensure new players are not pitched against pros too often?And will you offer them any sort of buff after a few consecutive deaths?

Oriola: Skill is one of the soft parameters that we take into account in our matchmaking. We always try to matchmake players of the same skill level, then relax that parameter over the time to hit the right balance between match balance and matchmaking time.

Gamesplanet: Will you be keeping an eye on class balance to make sure all the classes are treated equally, avoiding making one class overpowered?

Oriola: Of course, balancing will be one of our key focuses. We already tweaked balancing elements during our live periods and will continue monitoring players` feedback and data to ensure the best balance possible between our Heroes. For example, after the Closed Alpha, we already changed the Deflect mechanic that could be abused by high-level Orochis.

Gamesplanet: We know the game has 3 factions, the samurai, knights and vikings, would it be possible to expand that in future and maybe include another faction like Pirates/Swashbucklers?

Oriola: As of now, we're really focused on our 3 factions. We think there is a lot we can still bring into that world and fantasy. Knights, Vikings and Samurai, all 3 factions are great warrior legacies that have strong values, and from what we`ve seen players already know which ones they feel closer to. Then , who knows what the future can bring? 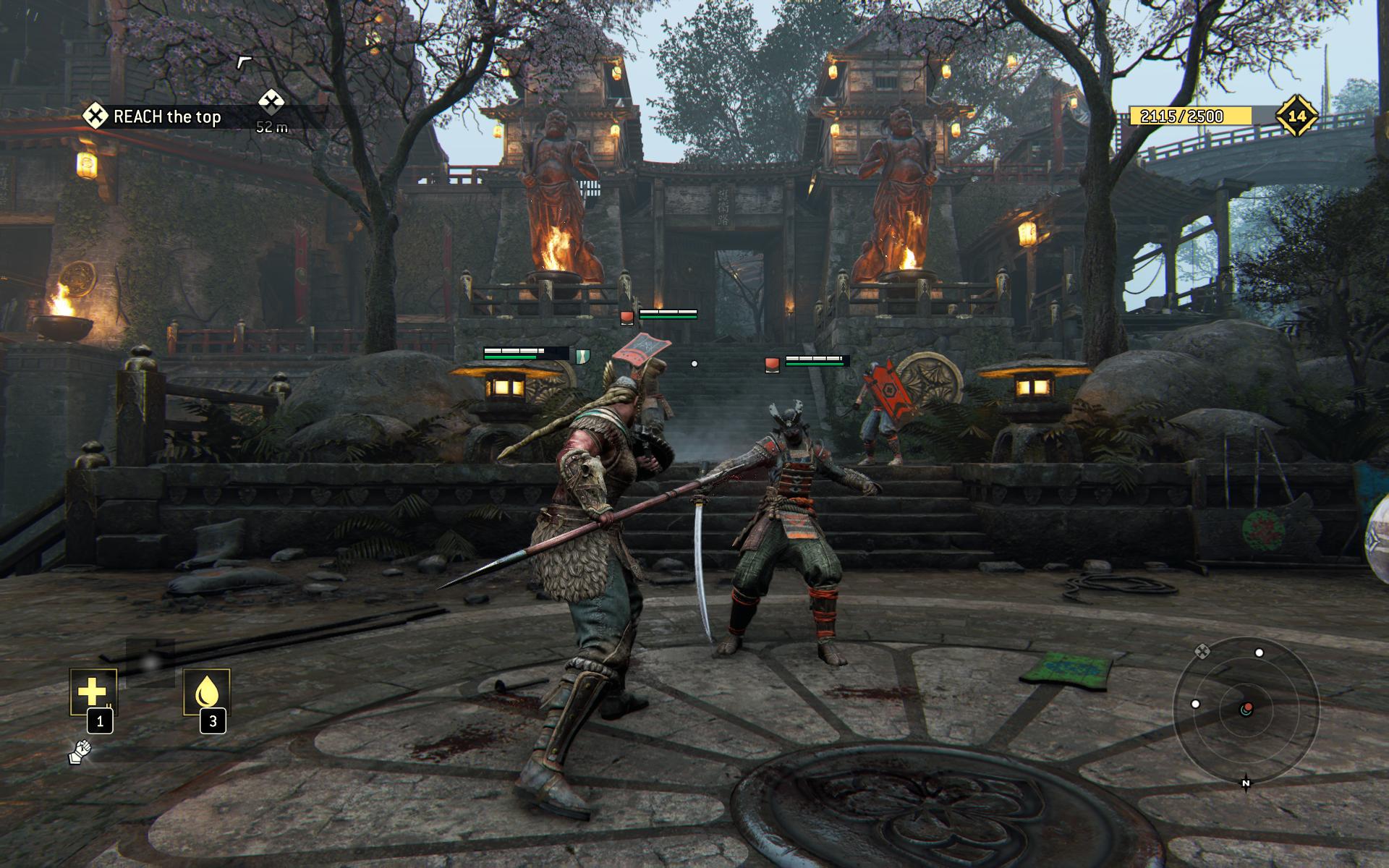 Gamesplanet: What are some inspirations you used for the history of the game, does it have a backstory?

Oriola: As for the inspirations, we never wanted to make a historical game. Knights, Vikings and Samurai never fought against each other on the same battlefields. But of course we had a deep look at the art, architecture and values of our 3 factions, both in history and in pop culture.

As for the backstory, the world of For Honor has been ravaged by a huge cataclysm 1000 years ago. This catastrophe brought the 3 great legacies of warriors back to simple tribes fighting for their survival. The Knights of the Iron Legions have progressively grown back and are in control of Ashfeld, the dry and bright land of their ancestors. The Vikings are back from the North and have settled in the cold region of Valkenheim. The Samurai have travelled from far ago in the East, are fewer in numbers but managed to build a living in the swampy jungles of the Myre. There have been skirmishes and battles between all 3 factions as early as warriors can remember and all it would take is a single spark to turn guerilla into open war.

Gamesplanet: For Honor is primarily a multiplayer title, but there will also be a single player story. What can you tell us about the single player mode?

Oriola: Our story mode is a tale of warriors that takes place a few years before the events of the multiplayer. A thousand years after a huge cataclysm that destroyed their world the Knights, the Vikings and the Samurai have finally managed to regain most of their old strength. Each of them now has the power to defy the other factions, transforming a rampant conflict into a total open war.

Embodying the greatest warriors in each faction, players live, from the inside, the events of a crucial moment in that age-old war. Confronted to manipulation and treason, they need to use all their wits and skills to ensure the survival of their people and foil the plans of the merciless and bloodthirsty warlord Apollyon.

Most of our missions feature pre-rendered or in-game cinematics that is the main support of our storytelling. From storming a fortress to protecting a war machine, from epic battles to intense duels, the campaign missions in For Honor are all designed to immerse players into meaningful events in which they play a leading role. And of course, as you can expect from a game featuring powerful melee warriors, there are quite a few memorable boss fights!

Gamesplanet: Generally speaking what are the benefits from leveling characters in For Honor, apart from the cosmetical treatments like earning outfits or emblems? Will there be some bonus moves to unlock?

Oriola: All Heroes can be played right from the start, even if some of them require to be recruited with Steel, the in-game currency, to get access to progression and customization. All moves and combos are also available from the start, but the Feats that are special abilities like calling a catapult strike or buffing your allies, unlock progressively in the first 6 to 8 hours of gameplay. Once a Hero has reached Reputation 1, which is 20 levels, everything that gets unlocked is purely for visual customization.

Gamesplanet: People are often referring to The Division when talking about the importance of Endgame Content. Is there something similar in For Honor for High-Level-Chars, possibly some special zones for them?

Oriola: For Honor is first and foremost a PvP Game so it’s difficult to compare with other types of games. We will introduce tournaments and ranked mode in our first big update and we hope that the most experience and competitive For Honor players will find here a great way to keep being challenged while accessing to new rewards.

Gamesplanet: Any plans for some time limited community events after release?

Oriola: We already have Community events in-game, those are specific Orders that the community of players will complete together to unlock cool rewards such as Steel of Scavenger crates. And the Faction War, our persistent, cross-platform metagame that takes into account every multiplayer match, will also create constant reasons to fight for all For Honor players.

Gamesplanet: How will you help gamers to organize their own tournaments?

Oriola: Our first major free update will introduce tournament and ranked mode. We will communicate on the exact content and timing of release at a later date. Gamesplanet: The game is primarily melee oriented. There are only a few abilities with ranged weapons. Do you have plans to add some ranged weapons ?

Oriola: The core of For Honor is really this face-to-face, visceral melee fighting experience so ranged weapons should remain special abilities.

Oriola: We will add new and free modes post-launch, but probably not with a bigger number of players.
We already worked on modes with more players but the balance between group fight and duel is really important in the game. After a lot of test, we found our current sweet spot to be 4vs4.

Gamesplanet: Taking feedback from the beta, should we expect to see some tweaks on the multiplayer mode for the release (Such as dedicated servers, player disconnects and bugs)?

Oriola: We collected plenty of feedback during Betas and already tweaked some elements for launch. For example we fixed an issue in our matchmaking system that was allowing too many intercontinental matches – now there are much less of those.

For Honor has its own network model that is different from game servers and traditional P2P. In this model, a player is elected as the game server (“the Host”). We don’t have a game host per se as the session host only manages the invites and handshakes of all players in that session. This is why the game can be impacted by a leaving session host, pausing the match for a brief moment until a new session host is elected, the game is synchronized and the match resumes. We are working hard since the beta to improve and stabilize network, and we will continue after launch.

During matches, every player runs a synchronized simulation and the game is played without any game host; all players are sending to all players what they are doing without the need of any answers from the other players thanks to the simulation. This is why our tech allows more reactivity and doesn’t have the “host advantage” problem of a traditional P2P model. When the match ends, the results are sent by all players to our arbitration service that validates its integrity. We also have other servers and systems that help us track and identify potential cheaters.

Gamesplanet: What does the PC version of For Honor offer over the console versions? Can we expect a range of PC Video Settings/Key Rebinds and more?

Oriola: We’re very happy with the global quality of our PC version that has been developed by PC experts at Blue Byte, a Ubisoft studio based in Düsseldorf.

First of all, it’s totally possible to play with keyboard and mouse on PC. We propose default bindings with the mouse being used to move the guard of the Heroes, like the right stick on a controller, but even that is totally customizable. During our betas, we’ve seen K&M players be as efficient as controller ones, so it’s really a question of personal preference. That’s a big achievement when you think that the Art of Battle was first designed with a controller in mind.

On top of the flexibility in the control system, PC players can enjoy many specific features, such as native 4K. unlocked framerate, customizable field of view, multi-monitor support and a wide array of graphical setting to make sure that For Honor looks as good and plays as smooth as possible on their personal rig.

We'd like to thank Ubisoft and the dev team for sitting down with us, the future is definitely bright for For Honor. You can pick the game up right now and enjoy brawling with others yourself.