Engage in a core roleplaying experience, and forge the destiny of a new world seeping with magic, and filled with riches, lost secrets, and fantastic creatures. With diplomacy, deception and force, become part of a living, evolving world - influence its course and shape your story.

A mixture of Dragon Age and The Witcher 3? Regardless of where you classify GreedFall and what comparisons the press make, the upcoming role playing game by Spiders launches on September 10th. Before that however, the developers are giving us a taste of the action with a brand new gameplay video. The clip focuses on the combat of the game and we see how melee attacks combined with powerful spells take whole groups of opponents apart.

Free exploration, action-packed battles and a lot of role-playing. In the video from publisher Focus Home Interactive and developer Spiders, we're introduced to the character creation as well as the various skills and attributes of game characters. We also get a taste of how the ranged, melee, and sorcery works in the game. In GreedFall you work with pistols, rifles, traps, bombs, rapiers and two-handed weapons to take down enemies. Players will have the ability to pause the action mid fight and cast powerful spells at your opponents, such as being able to immobilize them with stasis. If you're afraid of a longer confrontation, you can make things easier with stealth and strike from the shadows with an ambush. All decisions in GreedFall have consequences and the gameplay trailer gives us a taste of this in greater detail.

GreedFall launches on September 10th. Pre-order the game from Gamesplanet to save and get the Adventurer’s Gear Pack which contains the Explorer's Outfit, Rapier of the Alchemist and Wild Boar Ivory Rifle. 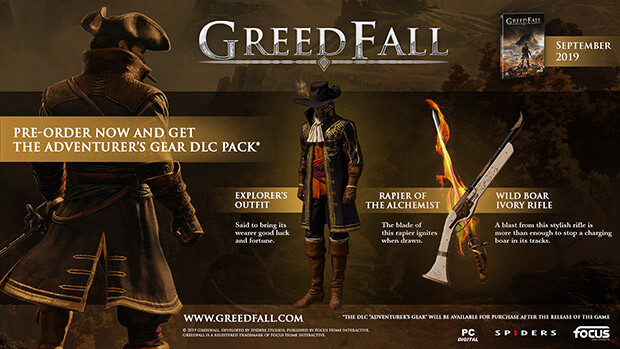