The Mediterranean republic of Medici is suffering under the brutal control of General Di Ravello, a dictator with an insatiable appetite for power.

Gamesplanet Review Round Up: Just Cause 3

Rico Rodriguez makes his explosive return in Just Cause 3. Set years after the events Just Cause 2, Rico has travelled back to his home Medici to stop General Di Ravello from world domination by any means necessary. Previous games in the series were always about causing explosions and having a sandbox enviroment to cause massive damage, so it comes as no surprise as this is another return to form with a huge set of islands and enough firepower to take down an entire army.

Just Cause 2 allowed so much freedom in the gameplay and even spawned a popular multiuplayer mod which made things enjoyable for a group of friends to get together and get up to all sorts of antics. Sadly that's not present in this game, instead you're relying on leaderboards to compete with your friends which is a real disappointment for sure. Perhaps we'll see a mod like we did last time, I imagine a team might even be working on that as we speak whether it be official or unofficial.

Does the Just Cause 3 offer a big bang or a tiny fizzle? Let's take a look at some of the reviews.

Over at GameInformer were impressed with the game, though regarding the explosions they commented on the fact that while good enough for a dozen times, they eventually they became dull "destruction feels routine after a while – especially if you make a goal of blowing up every military outpost and freeing every city." Wasn't all bad though, the wingsuit left a positive vibe with it first being clunky to control unlike Batman Arkham Knight which had a smooth pickup and simplicity to the controls. "Traversal is so efficient that I almost never drove; cars aren’t nearly as nimble, and the roads wind so much that they’re rarely a direct path to Rico’s next destination." Once you get used to the controls of the wingsuit and grapple controls it becomes a blast to get from location to location, some might even prefer flying instead of driving. They awarded the game 8 out of 10.

Next up it's IGN giving their final verdict on the game, it was given 8.0 out of 10. The massive open world is a highlight but also a curse, it has so many different places to explore such as sunny beaches, huge fields and snowcapped mountains. The problem is trying to complete everything might become boring and not that rewarding. While not everything in the world can be blown up, there is plenty that can especially when you combine your aresenal of weapons - "extremely potent weapons, ranging from machine guns and grenade launchers to an airstrike-targeting laser and a shoulder-mounted nuke, you can rain destruction down on everything in your path even while floating on your parachute." Enemies have the "clown car" effect and can spawn out of nowhere at times, this becomes a little overwhelming at times despite the dumb AI they seem to have. Despite the terrible AI you can use them to your advantage and string together some with your tethers, then attach a barrel with c4 and fling it at them. It's creative things like this that Just Cause 3 lives for, if you have the patience for it you can pull off some really crazy explosions. Just a man and his bike.

Destructoid gave it another good review, a game that's got plenty of rough points but can easily be overlooked. Even if the game doesn't have the best story in the world, it does have some great performances from each voice actor making their character believable and those characters may even make you smile. Rico has a handful of allies that aid him and the rebels throughout the campaign, and each character is great. Sure, they're essentially B-movie caricatures, but they're lovable caricatures." Another big improvement from Just Cause 2 is the grapple, which can now be used to tie together many objects and produce some really satisfying results. You can even upgrade the grapple to allow you to grapple up to 12 things together which will surely allow more freedom in how you do things. Final score was an 8 out of 10 and left a very good impression on the reviewer, "A memorable game that's hard not to like and recommend to others."

Last up it's time to see what the guys over at PC Invasion had to say with another 8 out of 10 being given. Gunplay isn't really great, it suffers from a lack of variety by only offering a few shotguns, pistols, assault rifles and a less than satisfactory shooting expiernece. In a game focused on explosive combat, this doesn't seem a massive problem as you'll be running around causing as much explosion as possible (it might have been nice to have some other crazy weapons besides explosive ones). Speaking of weapons, there are some really crazy ones for causing damage such as the Fire Leech - a split-missile launcher that blasts into the sky and homes in on your target. The game is going to depend on how you approach it on what you get back from it, "take Just Cause 3 for what it is – a massive, physics-enabled playground of destruction, like some sort of over-the-top cross between Red Faction: Guerrilla and Insert-Open-World-Game-Here – it is pretty bloody superb, and it’s very hard to get bored." Possibly one of the best things in the game is the physics system, I imagine there is virtually no limit to the crazy things that can happen with that. 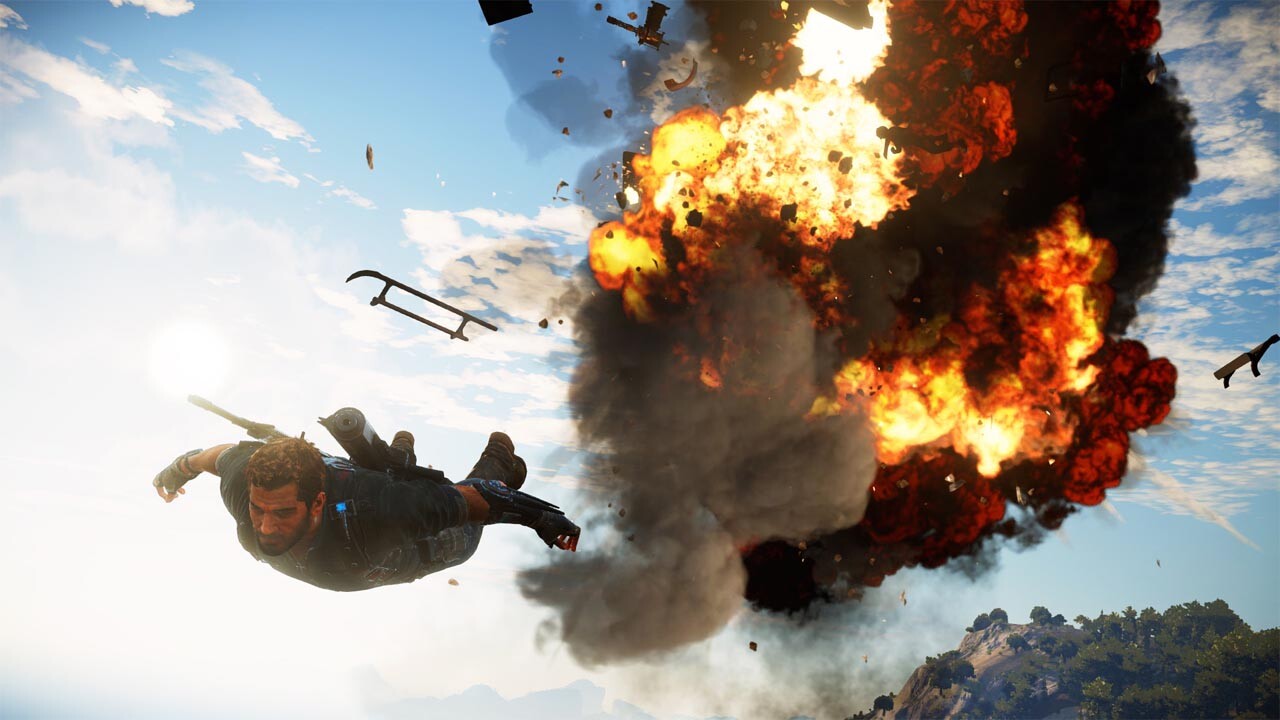 That's what happens when you touch my stuff.

Just Cause 3 has some issues and mixed views but if you're someone that enjoys the series, likes causing massive explosions and ultimate destruction then you probably won't mind some of the repetition. Even at it's heart the game does offer plenty to do and the game does feature some big improvements over Just Cause 2, it's just a shame they didn't do more. I'd imagine performance issues will quickly be fixed as the patches will try to remedy that, if you're looking for something to cause mayhem with in a wide open sandbox then this is probably the game for you!