Set off alone or with your bravest friends on a whirlwind of capers across the snowiest mountains, the leafiest jungles, the wettest underwater realms and the, uh, spaciest of space colonies.

Get a look at the characters of Sackboy: A Big Adventure with a new Trailer!

Do we want to let Sackface on our PCs? We should! Because Sackboy: A Big Adventure enriches the jump'n'run genre immensely.

On October 27th 2022, Sony's crochet icon Sackboy ventures out of his console corner and is ready to finally entertain PC gamers. Sackboy: A Big Adventure was originally born in 2020, first on the PlayStation 4 and 5, and is only now, after some improvements, ready to sweeten our gamer autumn on PC platforms. This will work out, as the original game was already able to snatch up some 80s and 90s ratings on console. Now on PC, many technical features have been added: playing at up to 120 FPS in 4K resolution, NVIDIA DLSS and 21:9 Ultrawide aspect ratio support, variable image refresh with HDMI2.1 display and a lot more.

What's going on in Sackboy's chaotic world? In Sackboy: A Big Adventure, the nasty Vex threatens peaceful coexistence with an upside-down device and has already kidnapped Sackboy's friends. Sony introduces Sackboy, Vex and other major characters in the game in detail in a longer trailer - including the helpful "kick-ass grandma" Scarlet.

Pre-order Sackboy: A Big Adventure on PC to get bonuses

It's worth pre-ordering the PC version of Sackboy: A Big Adventure on Gamesplanet. If you pre-order a Steam key on Gamesplanet, you will receive four bonus costumes that allow you to dress Sackboy up as the protagonist of some of PlayStation's biggest hits: 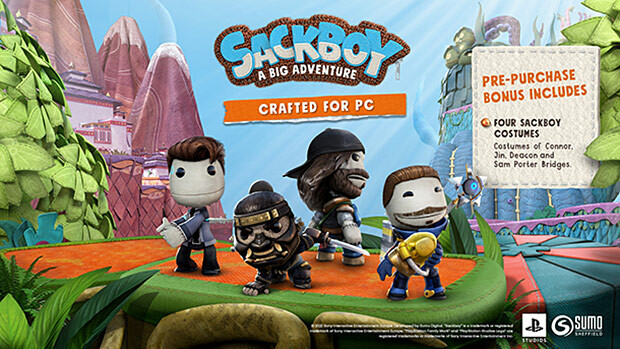