Go behind enemy lines with the ultimate modern military shooter. Choose your own path to accomplish your missions across an unforgiving open world.

Fans looking to jump in on the action in the upcoming open world shooter Sniper Ghost Warrior 3 will be able to signup to participate in an open beta starting February 3rd.

If you've been following the next entry in the Sniper Ghost Warrior franchise you'll know that it's looking pretty awesome and may be one of the best in the series. Should you want to get in on the action you can do that next month as it'll get it's very own own beta (only on PC) featuring 2 levels from the Single Player campaign (Cut Off and Blockout).

To get involved you'll need to signup on the beta site (yes, even though it's an open beta you'll have to register) here. Follow the steps and add your email to be in with a chance to play!

Want to check out the game before that? Last month the developers unveiled a brand new walkthrough for the Slaughterhouse map, a previously unseen level which presents itself with various ways to achieve the outcome.

Sniper Ghost Warrior 3 is out for PC, Xbox One and PS4 on April 4th. You can pre-order to get the The Escape of Lydia DLC and the Compound Bow DLC for free! 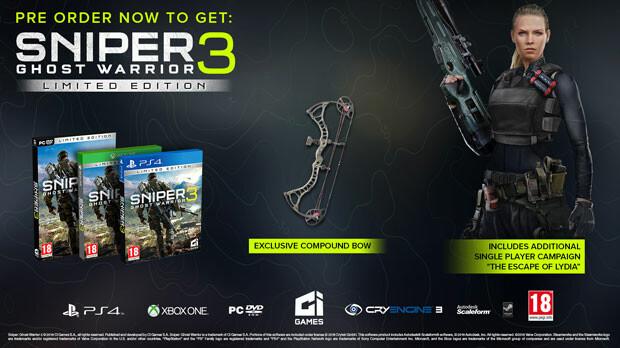 After playing the open beta I've pre-ordered the game. All my expectations were met. I think that they should work on the optimization a bit but other than that the game is ready