The Elder Scrolls Online will grow to an even bigger size with the new Blackwood content coming June 1st 2021. A new trailer now lets you peer through the gates of Oblivion into a spectacular fantasy world.

With The Elder Scrolls Online: Blackwood, a new chapter in online role-playing will open in TESO on June 1st 2021. The Blackwood Collection contains not only the base game, but also the new Blackwood chapter, Greymoor, Elsweyr, Summerset and Morrowind. This is even better for those who are newcomers to the Elder Scrolls Online - with the Blackwood package giving access to everything TESO has to offer. Experienced TESO veterans who already own the main game can grab the Blackwood upgrade.

The Elder Scrolls Online: Blackwood accompanies the year-round adventure "Gates of Oblivion". Bethesda is already letting us peek through the gates: Today the publisher has released a cinematic trailer that is well worth seeing. The anticipation is quite exciting to behold!

Explore the lands of the Darkforest with the upcoming Blackwood content, set 800 years before the events of The Elder Scrolls IV: Oblivion.Win new allies using the companion system and see what's behind the deeds of Mehrunes Dagon. You might want to rap the Daedra Lord of Destruction on the knuckles for scheming.

Create your ultimate RPG character, play solo or adventure with friends, and determine your fate in an ever-expanding world. With no level restrictions, go anywhere, at any time in a truly open world. In The Elder Scrolls Online, the choice is yours.

With a new tutorial, begin your adventure where you like: emerge from Coldharbour in the Base Game, battle Dragons in the Elsweyr Chapter, or get ready to face the Prince of Destruction, Mehrunes Dagon, in Blackwood, the latest Chapter. All content is accessible for new players, and you can switch adventures whenever you like.

As part of the Gates of Oblivion adventure, a deal made with the Prince of Destruction comes due in Blackwood. Explore Imperial cities and murky bogs, uncover Mehrunes Dagon's sinister plot, and never adventure alone with the new Companions System.

On Gamesplanet you can save on the various editions The Elder Scrolls Online: Blackwood. A comparison of editions will follow soon, but to start with pre-orderers can expect a number of extras. Some of them can be used in the game immediately after pre-ordering. You can find out more on the respective shop pages of all editions. 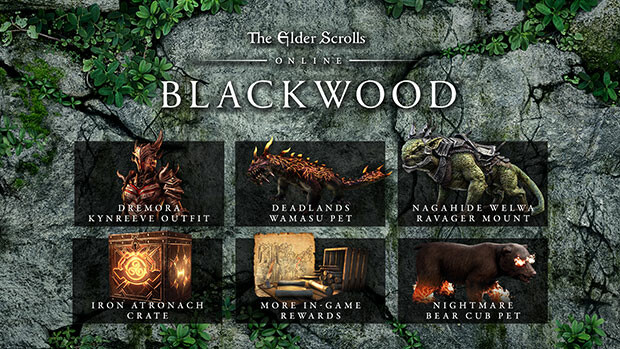