When the sun goes down on the last night of summer camp, nine teenage counselors are plunged into an unpredictable night of horror. The only thing worse than the blood-drenched locals and creatures hunting them are the unimaginable choices you must make to help them survive.

The Quarry game director shows off some new gameplay footage!

No proper teen horror without summer camp: You will set up camp yourself with the release of The Quarry on June 10th 2022. The staff in charge of the Hackett's Quarry summer camp are in a party mood, because there are no guests - and therefore no rules.

The locals don't know any rules either. Some of them turn up at the camp just in time for the party, covered in blood and apparently with a great hunting instinct to spoil the party. Taking on the roles of 9 camp counselors, you fight for sheer survival, make vital decisions - alone or with other players in co-op mode - and face a mysterious, even bigger threat.

The Quarry is being developed by seasoned veterans of adventure horror, Supermassive Games, who have made a name for themselves not only with the Dark Pictures Anthology games, but also horror titles such as Little Nightmares and the award-winning Until Dawn. It is said that The Quarry is very reminiscent of Until Dawn in terms of gameplay.

The Quarry director Will Byles takes you through the horror game in the gameplay overview video linked above, commenting on the importance of the choices The Quarry presents you with regularly throughout the game. Decisions either have an immediate impact on your story in the camp or you only feel the consequences later in the game. You might have guessed: such gameplay mechanics indicate non-linear processes and they usually ensure a high replay value.

Pre-order The Quarry and get Horror Graphic Filter Pack

Buy The Quarry from Gamesplanet by June 10th and receive the Horror Graphic Filter Pack. This allows you to customise the look of The Quarry to your exact liking by choosing from three movie graphic filters, each with a different horror movie style: Indie, 80s and classic black and white horror. 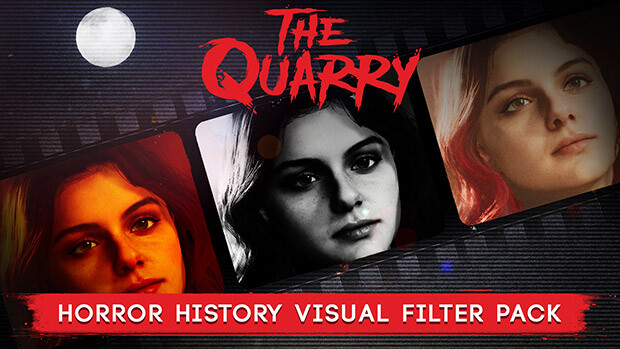