Pre-order Tom Clancy's The Division 2 to get preorder bonuses. There are three different versions of the game and each offers extras. To help you understand what these bonuses are, we prepared a small guide for you.

Are you ready to move out from NYC to Washington D.C.? You still have time to decide, but the clock is ticking as Division 2 is being released on 15th of March. Time to get ready, so drop your winter coats and hats as the game changes it's environment from the snow covered New York to sunny and warm Washington. In the meantime you might want to consider which version and bonuses you'd like to see in your game and we've prepared a separate PC Version Comparison Guide for you to easily see what is being offered with each version of the game. In this guide I'm going to lay out what is being given in each of these versions as a pre-order bonus.

Pre-order bonuses include few items, but you might be interested to hear that by preordering the game at Gamesplanet you'll get access to the game's Private Beta. Even better, with Gamesplanet's Private Beta Keys you can invite three additional friends yourself. What will it contain? We aren't certain yet as Ubisoft will provide further info closer to it's release. We can certainly expect to see a part of the capital city where we should be able to play few early-story missions. Apart from that the rest stays absolutely unknown until late January/early February.

All Tom Clancy's The Division 2 pre-orders come with bonuses

Apart from beta access all pre-order will include the so called Capital Defender Pack, which contains the following bonus items: 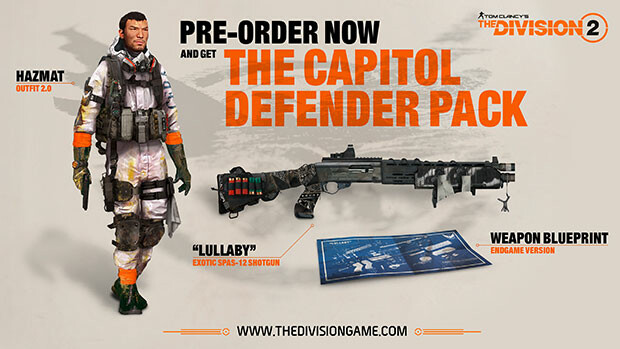 Don't miss your chance to secure these goodies. The game will be released on March 15th and we offer three different versions of it, each with the above mentioned content for preorders and each with 10% off. There's still time to decide, but you might want to make up your mind earlier and get access to Private Beta on February 7th.