In a world ravaged by war and dominated by magic, you must rise up to face the Chaos hordes. Playing solo or with up to four players in local or online co-op, choose a hero from four character classes and prepare for epic battles wielding some of the most powerful artefacts of the Old World.

Chaos is looming on the horizon and heroes must band together next week to drive back the Dark Gods when Warhammer: Chaosbane launches on June 4th. Take on a world ravaged by magic in the upcoming action co-op hack and slash game set in the Warhammer universe. Play solo, or team up with up to 4 friends in local and online co-op. Learn more about the story while you wait for the release with a trailer giving us a glimpse at what we can expect next week! 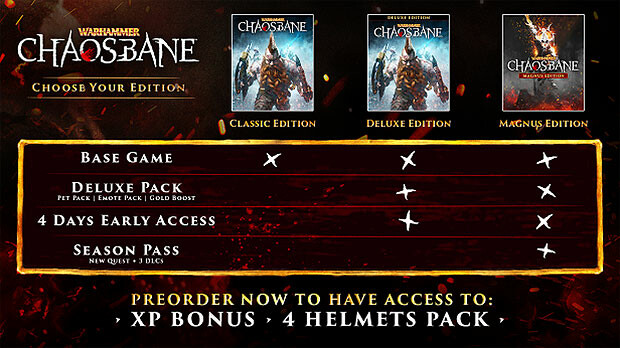 Warhammer: Chaosbane launches next week on June 4th. Pre-order any version of the game to get bonuses - including Early Access on May 31st if you purchase the Deluxe or Magnus Editions!