Watch Dogs 3 gets teased for E3 under the new name Watch Dogs Legion, as Ubisoft reveals the game on social media. More details to come at E3 2019 next week.

It's almost time to unleash the game announcements as E3 2019 arrives next week, but before that Ubisoft has given us a glimpse of their plans on Twitter by announcing the next Watch Dogs game in advance with a short tease "God Save the NPCs. Reveal at E3. #WatchDogsLegion #UbiE3". 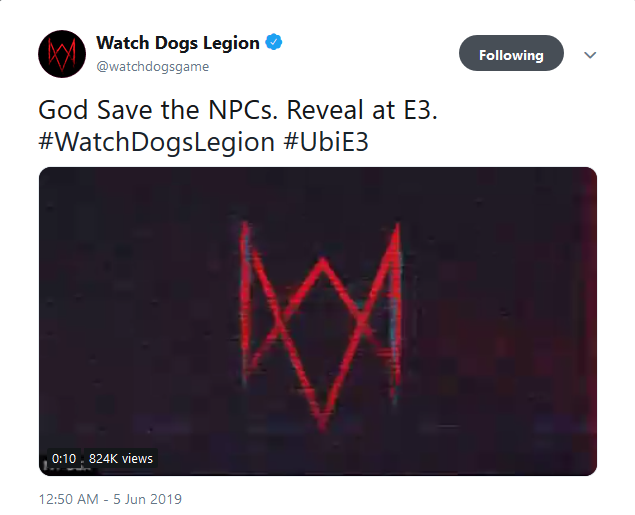 With the words "God Save the NPCs" Ubisoft confirms two more details from the leaks of Amazon UK and Kotaku. According to the leaked information it will be possible to play as every NPC in the game, with every single figure having their own animations, voice over, traits and visuals generated by gameplay systems. The slogan shared by the Twitter account also resembles the British and national anthem "God Save the Queen", which almost certainty confirms the rumour that the next game will be set in London. It's still not clear when the game will take place, but according to Amazon UK it'll be in a post-brexit world.

There's no doubt that Ubisoft will deliver at E3 2019 and we eagerly await the first real trailer for Watch Dogs Legion. E3 2019 takes place from June 11th to 15th in Los Angeles and will surely feature a number of great unannounced titles. Ubisoft will hold a major press conference on Monday, June 10th at 9pm BST. Could we maybe see a Splinter Cell reveal during the event too? Only time will tell.