Watch_Dogs - A Story Recap from the Original Game

The World of Watch_Dogs is going to expand next week with the upcoming launch of Watch_Dogs 2 with the PC version finally get released on November 29th, so what better way to celebrate the new than by exploring the original and what made it great at the time.

Back in 2012 during E3, Ubisoft unveiled it's brand new IP Watch_Dogs which would be set in a fictional Chicago where technology could be turned on it's head with the increasing risk of cyber security being used against others. 2 years later Watch_Dogs would finally be released and at last we got our chance to play as hacker Aiden Pearce as he searched for justice for what was done to his family.

As the game begins you'll start as Aiden who is busy socializing in a hotel, complete with his smartphone and buddy Damien Brenks the pair manage to break into computers, phones and anything else that has data to steal as they work on securing funds from unsuspecting victims. During that heist they stumble upon a file which causes them to be found by another mystery hacker, fearing for the increasing risk to their operation Aiden decides to pull the plug but Damien continues to investigate. Afterwards the mystery hacker places a bounty on Aiden's Family, including his Sister and her children Jackson and Lena. Trying to flee from the hitter, Aiden takes his family away but unfortunately they catch up to him and shoots their car causing it to crash and ends up putting little Lena into a coma, she later dies 2 months later as a result of injuries.

Things pick up again 1 year on as Aiden (now "The Vigilante") tracks down Maurice Vega, the man responsible for the tragic death of his niece at a local baseball stadium. Along with his associate Jordi Chin, Aiden manages to interrogate the hitman but to no avail as he is unable to secure the name of the person who ordered the hit on his family. To escape the stadium undetected Aiden hacks into the ctOS (the service that links things together, including cameras, phones, computers, traffic lights, ATM's and more) as a way out, causing a massive blackout in the stadium to help their getaway. Later Aiden would reunited with his sister Nicole for Jackson's Birthday party, but things take a turn for the worst as a caller seems to be harassing her and it's not long before Aiden is back in his pursuit for answers. 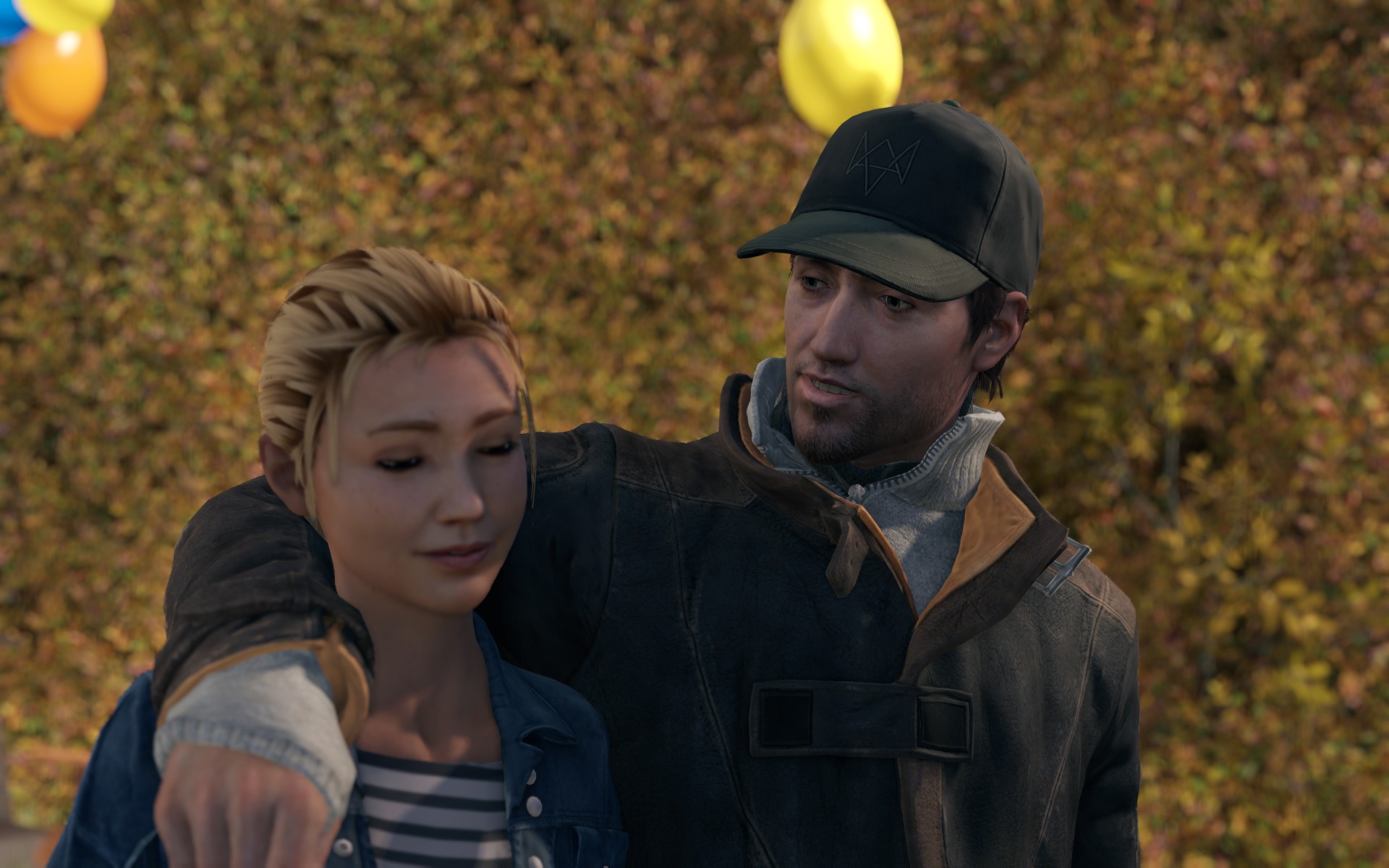 Aiden and his Sister Nicole

When Aiden confronts Damien he is exposed as the Vigilante to the police and is forced to enlist the help of T-Bone once more. They find Nicole and free her, while also taking a look at the data recovered from the servers which finally unmasks the person who placed the hit on Aiden's Family. It's the leader of the Chicago South Club Dermot "Lucky" Quinn, so Aiden tracks him down to confront him about the events which caused his niece to lose her life. He kills Quinn, but as he is dying reveals the real reason for why he placed the hit. Turns out that he thought Aiden was after evidence that implicated an associate of Quinn's, Mayor Donovoan Rushmore who had killed his secretary after she threatened to expose him. Racing back to Clara after Quinn's demise Aiden reaches her too late and she dies after being gunned down. 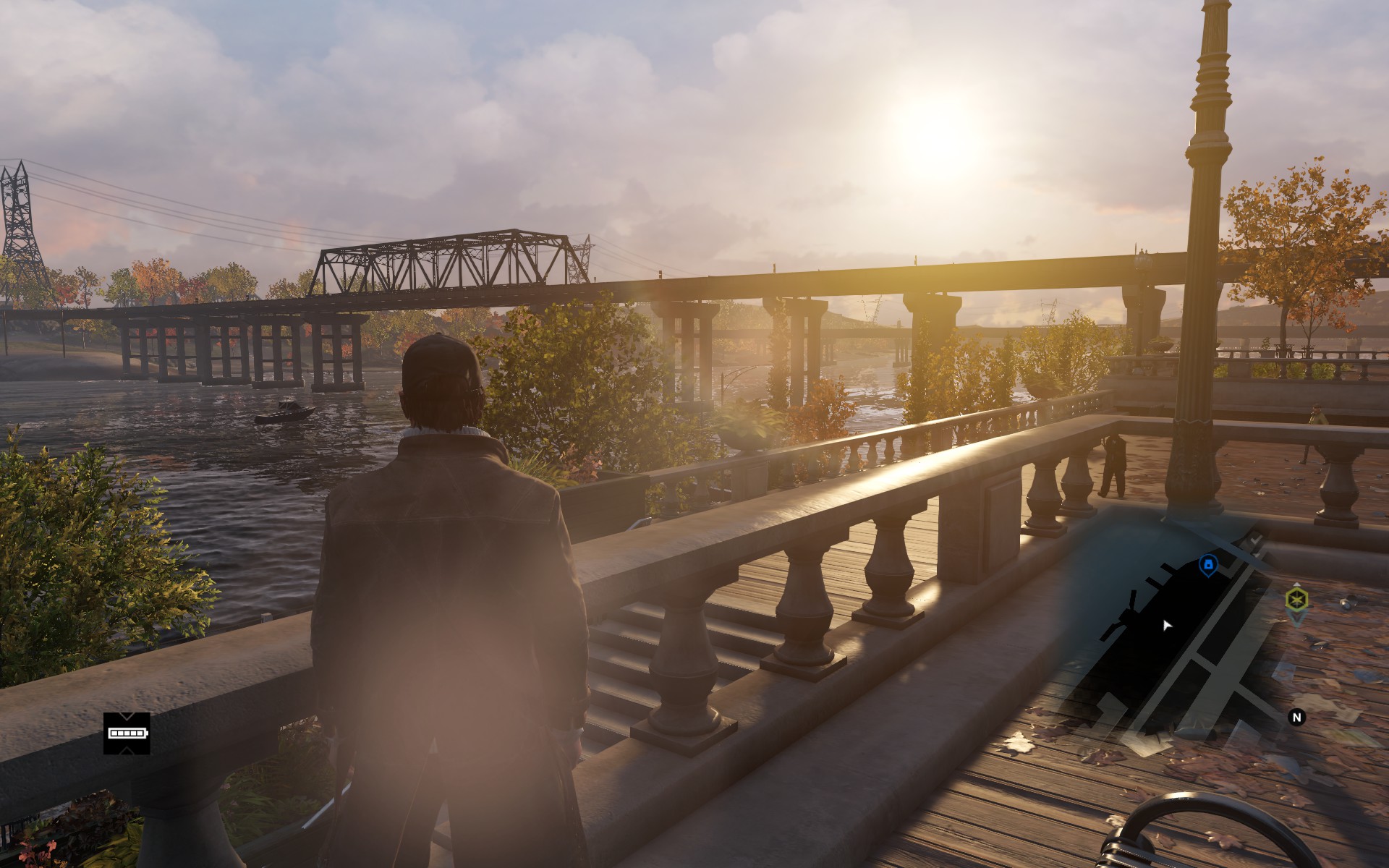 The end of the road

Damien is still on the loose and has taken over the entire ctOS network giving him freedom in the entire city, Aiden uses this to his advantage by uploading a virus into the network to shut it down. Eventually he tracks down Damien in a lighthouse and Jordi shows up, switching sides but Aiden triumphs over the pair by killing Damien. After it's over Aiden becomes the city's protector once more as the vigilante, ready to deal out punishment if needed (think of Arrow and you get the idea). He uploads the video of the scummy Mayor Rushmore to the internet and DedSec releases a video announcing they are sick of hiding in shadows and want a war with ctOS and the Blume Corporation (which later prompts the birth of ctOS 2.0).

This birth of ctOS is essentially the start of Watch_Dogs 2, the story picks up after as San Francisco Bay Area becomes the next city to become "linked". You'll play as Marcus Holloway who is a hacker from California and gets wrongly accessed of a crime he didn't do (sounds like the A-Team's motto). He eventually joins DeadSec as he realizes that the ctOS 2.0 is targeting individuals of the city. How will the story unfold? That's up to you, with the freedom to do things your way you can do things as you'd like. 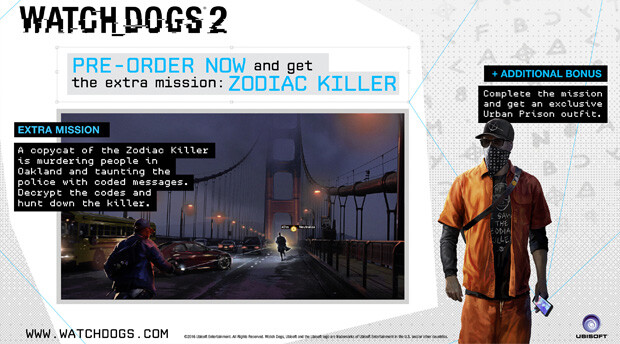 Watch_Dogs 2 is out November 29th, you can pre-order right now to get access to the Zodiac Killer Mission for free!