Watch_Dogs 2 - A Look at the PC Version in more detail

So Watch_Dogs 2 launches tomorrow and we've been given early access by our friends at Ubisoft to show off the PC version in all it's glory. You may have seen our recent PC vs Console post and been wondering exactly what each option in the PC version does? Well we're going to deep dive each PC setting to help you better understand and work out how to get the most out of your setup. We'll also discuss the port in general (we'll have a partner providing a video soon as well to give you an overview).

Let's get started, when you first get into Watch_Dogs 2 you'll be treated with this cyberpunk menu (much like the original's menu but less "stutter").

At the options screen you'll be presented with several menus to get the most out of your game, ranging from simple difficulty options to Video/Audio/Controls and more.

The Display menu hosts a number of features such Window Mode which supports Fullscreen, Borderless Window, Window, Fullscreen Boredless as well as Multi Monitor Options. Resolution will also scale to your setup with a variety of different sizes, there doesn't seem to be a single option missing. You'll also have the usual options like refresh rate, V-Sync and as a surprise they've even thrown in a FOV slider which unusual to see a 3rd Person game but a welcome addition (note this is default at 70, but can go up to 110).

Pixel Densisty is your typical Resolution Modifier for upscaling/downscaling the image.

Moving on to the "meat" of the port, the Graphics Options. When they set out to make a PC port they weren't kidding, everything is thrown into this from options including options to control San Francisco Fog (which does look amazing if you can handle the hog). Additionally Ubisoft have provided a texture pack with the game, you'll need at least 6.6GB of HDD space (ontop of the 22GB when installed) and it can make a real difference to the game having the highest quality available. Warning though, you'll need an extra 1GB VRAM to jump from High to Ultra textures!

I disabled Motion Blur during my experience since I believe it doesn't really look nice and can cause a little sickness to occur (but this is a personal preference). Provided you have the hardware for it, options like HBAO+ and PCSS offer better Ambient Occulsion and Richer Shadows for Nvidia users. Some of the other settings most people will be familiar with, a couple you may not understand though such as Vegetation which does pretty much what it says, controls the amount of vegetation in the game and during grassy areas it can look a dense jungle but it can hit the Frame Rates being high so use with caution). From my testing I found that Terrain, Geometry and Vegetation (as well as TXAA/MSAA) could really hit the Frames and I'd play around with those to get your "sweet" spot for the best experience.

Controls menu will offer fully rebindable keys, various pad options including aim assist toggles and a nice feature is that the game doesn't force you to have mouse acceleration, it appears to have raw input for mouse movement which makes a massive difference to the gameplay as it feels like you can move the mouse where you want. There are options to turn acceleration on, but I would personally leave it off.

This time around controlling vehicles with the Keyboard and Mouse feels much more responsive, gone are the days when the original Watch_Dogs cars felt like massive cargo trains that would refuse to turn and gamers should be able to enjoy driving as much as you would with a pad. My only complaint (which is minor) is that the default "hack" button is the middle mouse and that's a little fiddly when you're doing things on the fly but it's not a big deal since you can rebind.

You also have separate options for driving/vehicles/drones so bind them the way you want.

Lastly we've got the gameplay menu which allows you to customise your experience by toggling certain "pop ups" that appear in game or by simply disabling the weapon reticle. It's clear that Ubisoft have really put some time into this port and it does show with a lovely crafted world which is a step up from some of the more recent ports we've had. I tested it on an i7 6700k (OC'd to 4.6 ghz), a 980ti and 16GB Ram on Windows 10 with an enjoyable experience throughout, I'd suggest that people turn off Temporal Filtering to get the best image quality, but if you're having issues running the game at a stable FPS to turn it On

How to Install the Ultra HD Texutre Pack 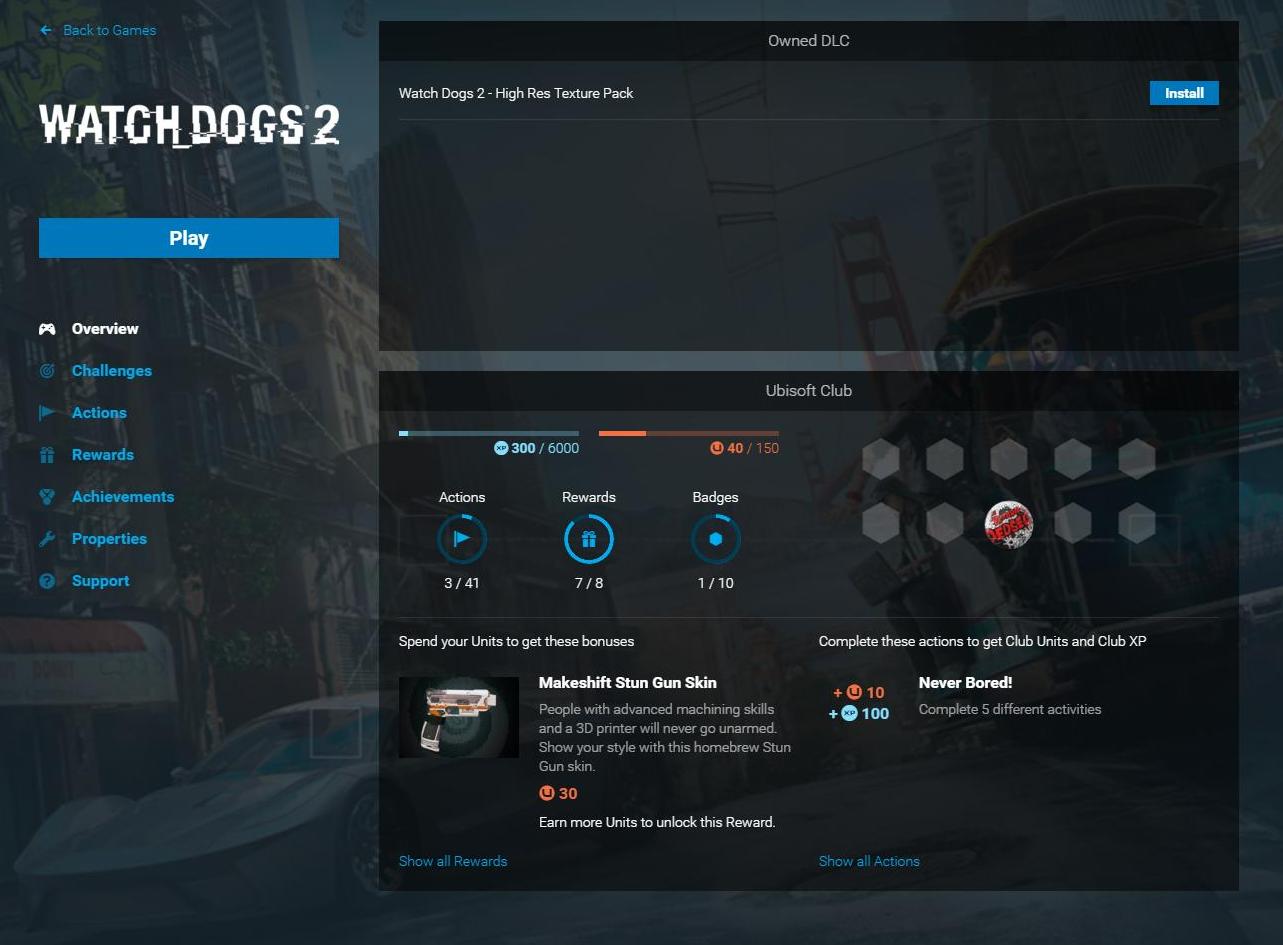 Before you start you may wish to grab the free Ultra HD Texture Pack, this can be obtained from the your Games Overview Page for Watch_Dogs 2, click "Install" on the Watch_Dogs 2 High Res Texture Pack. It will give you an additional download of a 6.6GB file (after install your game directory should be at 28.6GB in total so be sure to have at least 30gigs free HDD space).

During my time with Watch_Dogs 2 I have mainly been tweaking the game to get it to run/look the way I want and I haven't really done much with the Gameplay side of things yet but I wanted to offer a chance for people to see what the game looks like on my hardware to see just what a pretty game awaits them on November 29th.

We'll leave you with this cute little guy, stay tuned for more content from us as the release approaches and we'll provide even more great content (including Dog Watching).

Pre-order Watch_Dogs 2 today to receive access to the Zodiac Killer Mission when it launches tomorrow!