Bethesda reveals the PC System requirements required to power the upcoming action FPS shooter sequel Wolfenstein 2: The New Colossus ahead of the release on October 27th.

Not long to wait until Wolfenstein 2 The New Colossus blasts onto our screens, as BJ Blazkowicz returns this Friday! With such a promising FPS experience, MachineGames and Bethesda have revealed the final system specs required to run the game. Additionally it's also been revealed exactly what PC gamers can look forward to with the options and features coming to the FPS sequel.

Speaking a little about the PC Version, executive producer Jerk Gustafsson confirmed that they were serious gamers and would be making sure that the PC version offered a number of options for PC players.

"Many on the team here are dedicated PC players and there’s been a lot of engagement in making sure we accounted for and went above and beyond to add lots of additional settings for PC players. Everything from unlocked framerates, field of view slider, to lots of advanced visual settings like lights, shadows, reflections, the list goes on!"

The game will also supported a number of Anti-aliasing options, support for players who are colourblind and a number of other enhancements to make the PC version the best it can possibly be. Vulkan will also be supported and the requirements needed to run the game will take full advantage of that to ensure all gamers get great performance on a number of systems.

Mods are not planned for Wolfenstein 2, but the team would love to support them at some point in the future. New Order issues like texture pop-in and low framerates have been fixed in the sequel, and players should not have to worry about that this time around as the game will run on the ID Tech 6 engine (which was last seen in DOOM).

"The New Colossus version of the id Tech engine is no longer mega-texture based, which means we have a lot more control over when and what textures are being streamed in. With that said, there will always be texture streaming, but in a way that will cause a lot less risk of noticeable issues." 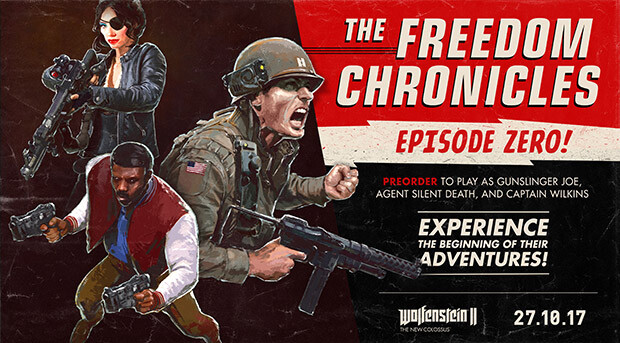 Wolfenstein II: The New Colossus launches this Friday October 27th, pre-order to get your key right now and you will also get The Freedom Chronicles: Episode Zero for free!

Thank you for replying.

when is the pre-load

There's no news yet on a preload time or if there will be one.