Team up with a friend or play solo as one of BJ Blazkowicz’s twin daughters and wield a powerful arsenal of new weapons, gadgets, and abilities to liberate Paris from the Nazis.

Bethesda today announced the continuation of the Wolfenstein series with a brand new Story Trailer for their upcoming shooter sequel Wolfenstein: Youngblood, which is a joint project of Machine Games and Arkane Studios Lyon that is launching on July 26th 2019. One of the special features of the game is the Buddy Pass, which allows two players to fight side for side - as long as one person owns the game (for Deluxe owners only).

Wolfenstein: Youngblood is best played in co-op mode with friends, but if you don't have any friends you can still enjoy the game as a single player experience. In the game you'll play as B.J. Blazkowicz's twin daughters Jess and Soph as they set out to track down their father and clean up Paris. Expect even more guns at your disposal as you take on the Nazi terror once again.

Buddy Pass in the Deluxe Edition

Like EA's Prison breakout game "A Way Out", you're able to invite another player to join the game with you, as long as one player owns the game. Bethesda is doing the same with Wolfenstein: Youngblood and owners of the Deluxe Edition will get the Buddy Pass, which allows a second player to join in the action for free! Those who still wish to play the game solo must purchase the game themselves. But if you're looking to fight Nazis together you can take advantage of the Deluxe bonus.

Wolfenstein: Youngblood is available on July 26th, the same day as the VR Spinoff Wolfenstein: Cyberpilot. You can pre-order the game Youngblood today to get the following bonuses for free! 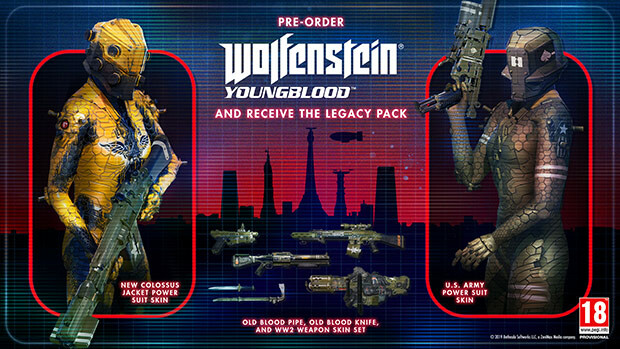