In a bid to survive, explore the sprawling, devastated Jericho City. Fight ferocious threats in brutal, unforgiving combat, slashing and tearing the limbs off your opponents to steal their equipment.

Slice and dismantle foes as The Surge 2 prepares for release next week on September 24th. Developer Deck13 is getting ready for their upcoming Action-RPG sequel by giving us a taste of what awaits us at launch. Take apart foes with the limb-targeting system, allowing for easier attacks and brutal executions using a variety of weapons. Target weak points and get equipment for yourself to allow for even more damage.

How you finish off foes will be up to you, and it'll be up to you to decide between risk vs reward as you battle some of the tougher enemies in the game. You'll even be able to use a customistable combat drone to assist you in battle. Travel to Jericho City and learn the mysteries of the nanomachine plague next week when The Surge 2 launches.

The Surge 2 will be released on September 24th 2019. Pre-order your Steam Key online on Gamesplanet now and you'll receive the exclusive URBN Gear Pack, which contains bonus weapons and equipment for the game. 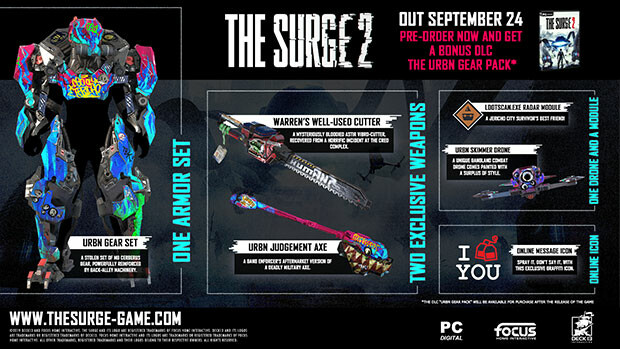