With Wolfenstein 2: The New Colossus you play as B.J. Blazkowicz once again as he does his best to fight against the Nazis from taking over America, but he's not alone. The Freedom Chronicles Season Pass will add new story content that will put you in the shoes of new characters and new locations, with the first arriving on December 14th. All of these DLC packs can be purchased separately or in one go with the Season Pass/Digital Deluxe Edition. Let's break down when each one is coming and when you'll be able to get your hands on them!

If you have pre-ordered Wolfenstein 2 from Gamesplanet, or if you purchase the Digital Deluxe then you will have access to the Episode Zero DLC right now. This can be confirmed by checking your DLC tab in your Steam Library.

Episode Zero introduces you to Joseph Stallion, Jessica Valiant and Gerald Wilkins as they fight for freedom in the American Territories. Blast your way through Nazis using unique abilities and an arsenal of guns in this opening DLC mission.

Wolfenstein 2: The Adventures of Gunslinger Joe

Release: 14th December 2017
The first DLC will see you play as professional quarterback Joseph Stallion, as he does his best to break through Nazi forces from the ruins of Chicago to the vastness of space!

Release: January 30th 2018
Next up is the The Diaries of Agent Stiller which will put you in the shoes of secret agent Jessica Valiant who is capable of dealing with foes from the regime. Set in California, she will infiltrate a bunker to uncover the Operation San Andreas secret that the enemy is hiding.

Release: March 2018
Finally there's the last DLC, which is launching in March 2018. You play as the US Army’s renowned hero Captain Gerald Wilkins, as he takes on a mission to Alaska to take back control from the Nazis and dismantle Operation Black Sun. 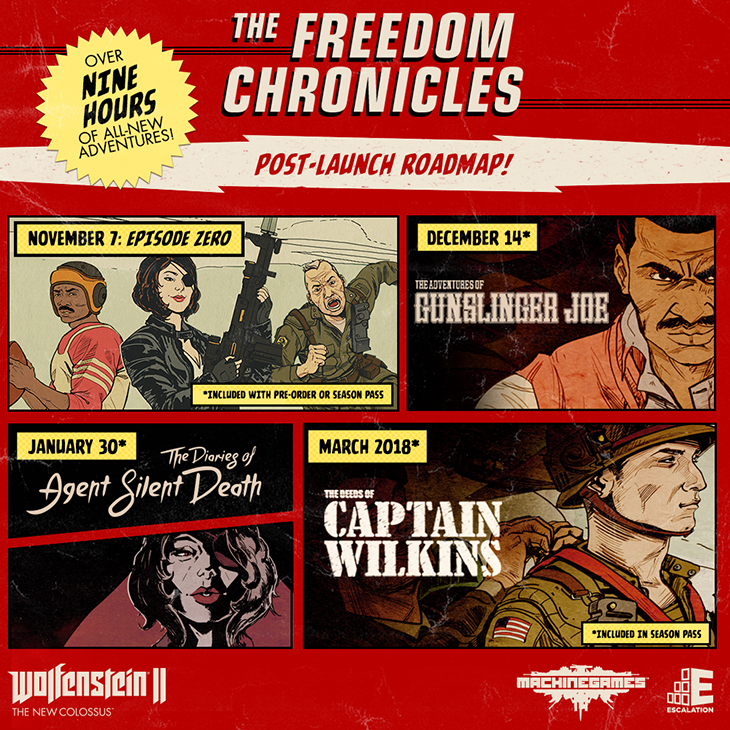 Get all of the above content with the Season Pass or with the Digital Deluxe.