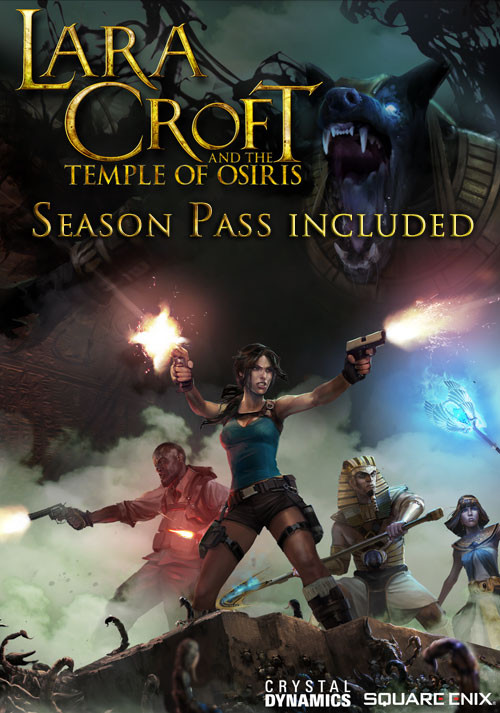 Buy Lara Croft and the Temple of Osiris - Season Pass Included as a Steam Key.

The season pass includes all future DLC content including the Icy Death and Twisted Gears Packs. The upcoming DLC Packs offer 6 additional costumes and will challenge Lara, Carter, Horus and Isis to conquer additional tombs and collect a treasure trove of unique rings, amulets and weapons. The Season Pass does not include the pre-order packs.

Lara Croft and the Temple of Osiris takes place deep in the deserts of Egypt. In her new adventure, Lara must join forces with rival treasure hunter Carter Bell and imprisoned gods Horus and Isis, to defeat the evil god Set. As Lara and her companions fight the elements of nature across the sands and through ancient tombs, they will battle legendary deities and creatures of myth. With the fate of the world at stake, Lara must recover the fragments of Osiris to stop Set from enslaving all mankind.

Critically Acclaimed Franchise
Sequel to the award winning Lara Croft and the Guardian of Light, one of the best-selling digital titles of all time.

All-New Adventure
Lara must overcome deadly traps and forsaken gods to uncover the missing pieces of Osiris and change her fate.

Classic Arcade Action
First ever 4 player co-op multiplayer experience featuring Lara Croft. Have your friends play as Carter, Isis, and Horus while you play as Lara in the fully cooperative story mode – both offline and online supported.

Competitive Co-op
Compete against your friends with seamless drop-in/drop-out co-op to earn bigger rewards, treasures, and powerful artifacts to boost your character. Will you work together or will you sacrifice your friends for a higher score?

"Lara Croft and the Temple of Osiris is an excellent action-puzzler adventure, whether you play solo or co-op."

"My main complaint is that there isn't enough of it—clever puzzles, shooting, and platforming have zero fat, and make its four hours fly by."

"Like most multiplayer games, Temple of Osiris is better with friends. Thankfully, the game does a good job making each person feel like an integral part of a team"

Problems with Lara Croft and the Temple of Osiris - Season Pass Included?

Optip Lara Croft and the Temple of Osiris | Part 1 | The C...
Want to see your Let’s Play at Gamesplanet?
All Let's Play info is one click away