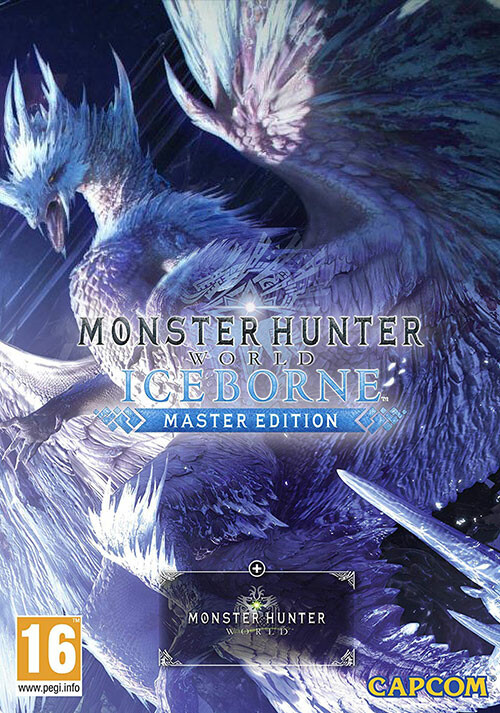 Note: Layered armor only changes your character's appearance. It does not include any weapons

Capcom announces the first expansion for Monster Hunter: World, with the Iceborne Expansion coming in Autumn 2019. Geralt from the Witcher series will also come to the game in Early 2019....

Monster Hunter World:
Welcome to a new world! Take on the role of a hunter and slay ferocious monsters in a living, breathing ecosystem where you can use the landscape and its diverse inhabitants to get the upper hand. Hunt alone or in co-op with up to three other players, and use materials collected from fallen foes to craft new gear and take on even bigger, badder beasts!

All-new Hunting Mechanics
All 14 weapon types have new moves and combos. Each weapon has more unique actions than ever before. Every weapon now lets you use the clutch claw, a new function of the slinger, to grapple onto monsters. You'll drain your stamina while clinging onto monsters, but it opens up various new ways of controlling their movement!

New Quest Difficulty: Master Rank!
On top of low rank and high rank, there is now a new quest difficulty called "master rank." Master rank quests will become available once you purchase the Iceborne expansion. You'll be able to earn new materials and fight even stronger monsters on these quests!

New Locale: Hoarfrost Reach
An unknown environment, yet to be discovered by mankind. Hoarfrost Reach has plenty of unique endemic life and monsters that could only exist in such a harsh climate. It has diverse geographical features as well, from deep stretches of snow that impede your movement to relaxing hot springs, and even unstable ground that could collapse at any moment! The visual effects are some of the most detailed the Monster Hunter series has ever seen!

Various New Monsters!
Hoarfrost Reach is home to many new endemic creatures and monsters, such as the snow-swimming Beotodus, the raging Banbaro, and the mysterious elder dragon Velkhana.

"Iceborne is a hefty expansion that provides a bigger, badder challenge. The fights can be both exhilarating and maddening, making it an experience of intense highs and lows"

"Fails to explore its themes but still delivers the series' most potent monster hunting yet."