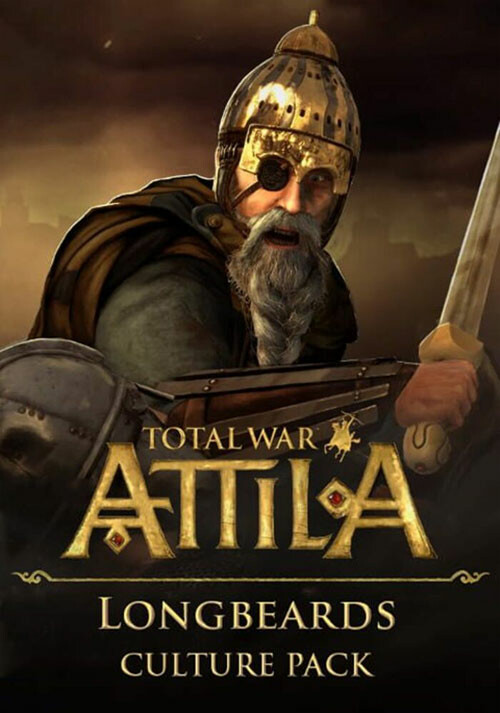 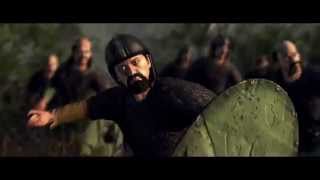 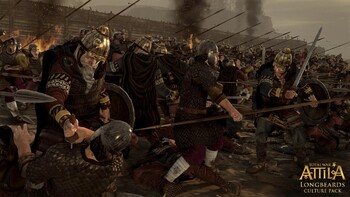 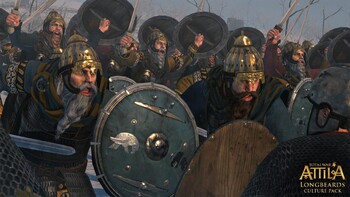 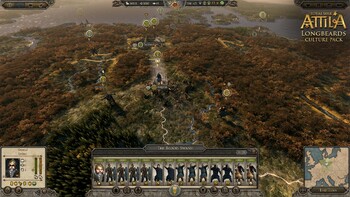 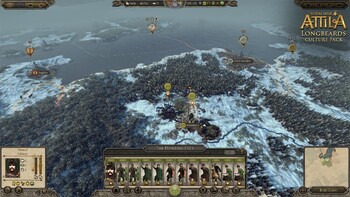 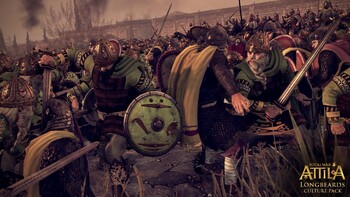 The Longbeards Culture Pack brings three new playable factions to Total War™: ATTILA. The Langobards, the Burgundians and the Alamans may be used in Single or Multiplayer Campaign modes and Custom and Multiplayer battles.

After centuries facing the threat of Roman dominance, these three formidable and warlike Germanic kingdoms are ready at last to sweep forth in expansionist campaigns from their tribal homelands. The Western Roman Empire lies to the South, her border territories weak and ripe for the plunder. With their unique blend of new buildings, battlefield units and faction traits, The Longbeards are poised to exploit the chaos of the age.

In history, these factions would go on to found some of the great empires of the medieval period. Will you marshal their might to forge those empires yourself?

Playing as these factions will present you with a new series of linked narrative events. The Lay Of Ybor is delivered in the style of a Germanic Saga, in which you direct the actions of a fabled hero through a series of branching narrative choices. As the story draws to its conclusion, Ybor himself becomes available as a general for your armies, complete with traits that mirror the choices you made.

These factions bear unique traits which differentiate their play-style in the Total War™: ATTILA Grand Campaign.

The Burgundians: Bred For The Hunt
Icy Determination: +25% unit replenishment
Harsh Sustenance: +10 food for every region with poor fertility

The langobards: Godan’s Chosen
Emancipators: +50% more men recruited from defeated enemy forces.
The Fury of Our Maker’s Hand: +10% unit morale when fighting armies of other religions.

Players waging a campaign with the Langobards, Burgundians or Alamans will receive a unique series of mission objectives over the course of the campaign. Among these is a new optional objective which offers you a substantial injection of wealth to abandon your settlements and become a true migratory faction.

Complementing the Germanic barbarian unit roster, The Burgundians, Langobards and Alamans each have access to a number of unique units in battle:

The Longbeards Culture pack features several new ancillaries with which to bolster the skills and abilities of your campaign’s key characters:

Burgundians
Although occupying the eastern part of central Europe in AD98 and surrounded by other tribal societies, archaeological and linguistic evidence suggests that the Burgundii originated on the Baltic Sea island of Bornholm. By the first century AD however, the Burgundii were active in mainland Europe. As the centuries progressed, they solidified their position as a power in the north and east of the continent. Although defeated by the Romans and surrounded by enemies, as the 4th century begins and the authority of the Western Roman Empire wanes, many tribes have pushed further into former imperial territory. As such the Burgundii now have the chance to move across The Rhine and take their rightful place there – in a world free from the shackles of Imperial Rome!

Alamans
As the spirited successors of the Suebi the Alemanni intend to forge a new life for their people away from the nomadic terror of the Huns and their ilk. Regarding themselves as Rome’s nemesis despite several defeats – notably at the battle of Lake Benacus – they have nevertheless stripped the empire of much of its western territory and have the collective will to carry on the fight. Led by a tribal confederation of greater and lesser kings, princes and chiefs who claim royal blood, the Alemanni levy a diverse range of Germanic troops to fight for them. Their destiny, however troubled, lies in greatness beyond The Rhine; their tenacity and sheer bloody-minded determination will see their ambition realised!

Langobards
When the small yet noble Winili tribe faced the vandals, their god Godan declared he would give victory to the tribe he saw first on the day of battle. Seeing the Winili with their women warriors, he asked “who are these long beards?” and awarded them victory. The tribe were from then on known as the Langobardi. Now they live along the river Elbe, far from their roots. Led by their king, who shares power with his people wherever possible, they are a determined tribe who have weathered many storms to achieve greatness. Langobardi history is marked by struggle and bloody conflict, and their future doubtless holds more of the same. Yet the Longobardi will emerge victorious, with renewed strength, to face anything the gods can throw at them!